So my blog and I took an unexpected break... but hopefully this post means I'm back...

So what's been going on? Well back in January I took a risk: I left my permanent, though ill-defined job at the end of my maternity leave. It wasn't heading in the direction I really wanted my career to go in, and whilst a permanent job is huge reason to stay, career progression was a huge reason to leave. I took a 6 month contract going back to what I love to do - payroll. And when it ended at the end of June, I was made permanent! 6 months of unknown, and wondering if I had done the right thing paid off! I work from home, with some travel, so I get to spend more time with the girls, and no time commuting, which is such a luxury. 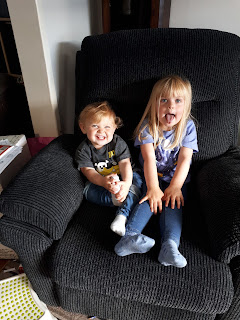 But a full time job with two toddlers is not the easiest of things to juggle. And when I have time, I'm inevitably spending it sewing. Instead of blogging. That means that I have a load of stuff (including lots of finishes) to share with you, but I just haven't had the time to write them up.


We've just come back from our summer holiday. To be honest it wasn't the best we've had. Sidmouth was Sidmouth, but there was some stress involved this year and the line-up wasn't quite as good as some years, so we're going to think very carefully about whether we go next year - some of the factors are not in our control, but I need to deal with that unknown. And the second week camping in Cornwall was fabulous. But camping with a 15 month old has it's own challenges, and once Jess started screaming rather than sleeping every time we put her in the car, we called time and headed home a few days early.

We've been back a week now. And we're all finally back in our routines (we'll ignore Jess's sleep routine - or lack thereof). And it's time to look ahead to *whispers* Christmas. That's four months away (sorry) - what is scheduled during that time, what work trips do I need to travel for during that time, what do I want to achieve by the end of the year. Well obviously that last part is ridiculously over-ambitious, but part of it is to blog more regularly. 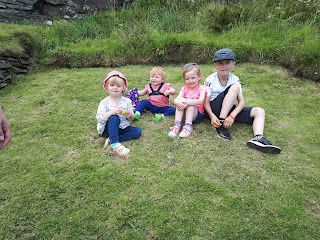 So I'll try and catch up over the next week or so and post some more pictures from our holidays and let you see what I've been working on!
Posted by Jennie at 19:30

It's lovely to see you back here and to learn the job is going well! Sorry the holidays weren't as relaxing as hoped, I hope Jessica settles into a sleep routine soon x

Glad you have found a job you enjoy and that suits you. Nice to see you back here too. xx