This is the quilt I was going to finish when I finished my Tula Nova. Luckily I had a day off a week later and this was top of the pile! Two years after I started it, my Fancy Forest quilt is now a finish! 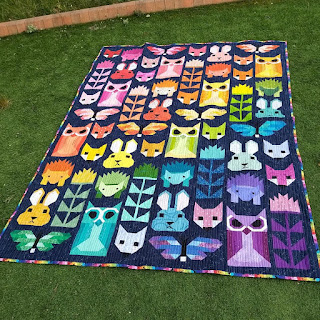 I started this quilt as part of the Elizabeth Hartman All The Animals Sew Along hosted by @gnomeangel in 2018, but I only got as far as the foxes and the rabbits. In Autumn last year, I picked it up again and pushed it over the finish line - a finished quilt top. I love the rainbow effect - which I wasn't sure was working at the half way point.

I love the owls - I've made loads of these blocks now, yet I still managed to sew one together wrong. I was away at the Sewing Shindig Retreat that weekend, so I couldn't just recut the pieces I messed up. We had such a laugh about my little mistake, which I didn't realise until I'd finished piecing my owl, that I decided to leave him and not redo. So I have 7 mean owls and one slightly sheepish one! I think he's cute and he reminds me of a fabulous weekend! And the final blocks were made two weeks later at our Local Modern Quilt Guild retreat. So this quilt is full of memories. 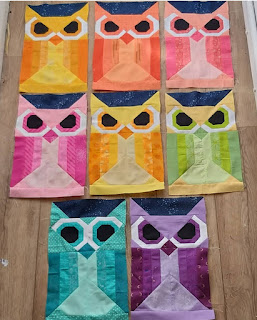 It took me a while to get round to basting the quilt. I'd bought some Elizabeth Hartman extra wide backing for it when I first started making it, but when I came to layer it up, it wasn't big enough. I swore! Then I went online and managed to pick a bit more up in a sale, which was something of a miracle given how old this fabric is. 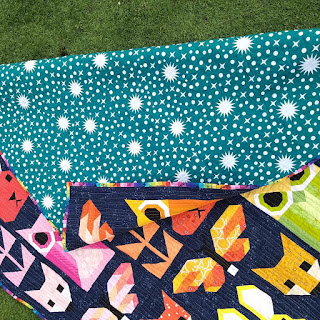 I thought I knew exactly how I wanted to quilt it, but then I saw some quilted that way on Instagram and decided that actually, I wasn't keen on the finished appearance. So I thought vertical organic staraight (i.e. wobbly) lines. I did four lines and then unpicked them. Back to the drawing board. The eventual quilting pattern was a sudden brainwave as I was feeding Josh in the middle of the night. Vertical "straight" lines but over shorter distances! It's a zigzag with soft curves and random heights. There was an initial learning curve, about which way I needed to have the quilt - I found it was important that the previously quilted section was between me and the machine, rather than behind the needle, so I could see it and not cross over the previous quilting lines, and whilst that meant I had to force quite a large chunk of quilt through my machine, it was definitely worth it - but I do appreciate the larger throat space on my machine now! The quilting also turned out denser than I had originally visualized, but I love it. 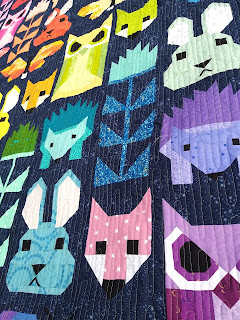 And my final touch of genius was the binding. I'd originally planned to use the same navy fabric I'd used the background. But I couldn't find it. So I'd ordered some rainbow and white striped fabric. And then I found a rainbow. And the minute I saw it I knew I had to have it! It's Buzzin Around Stripe in rainbow from Andover and it was perfect! I don't recall ever getting so many compliments on a binding before! 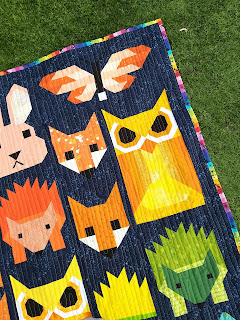 The finished quilt is a whopping 67" x 91" and is a Finish Along finish!

This is just wonderful. Congratulations on the awesome finish!

It's beautiful, and I absolutely adore your sheepish owl!

Your quilt is absolutely beautiful. I love the colors that you selected for it.

Do you understand there's a 12 word phrase you can tell your partner... that will trigger deep feelings of love and instinctual attraction to you deep inside his heart?

That's because hidden in these 12 words is a "secret signal" that triggers a man's impulse to love, worship and guard you with all his heart...

This impulse is so hardwired into a man's genetics that it will drive him to work harder than ever before to to be the best lover he can be.

Matter of fact, fueling this all-powerful impulse is so binding to having the best possible relationship with your man that the instance you send your man a "Secret Signal"...

...You will instantly find him open his heart and soul for you in such a way he never experienced before and he'll recognize you as the only woman in the universe who has ever truly fascinated him.