Four years ago I made Santa Sacks for Mia and Jessica (I can't believe it was that long ago!). I had planned to do stockings for them, but I couldn't find a pattern I liked that was big enough to take presents without having to be too careful to buy small ones, but not so big that it would cost a fortune to fill... my husband's family always had pillowcases rather than stockings growing up, so a drawstring bag seemed like a great compromise. 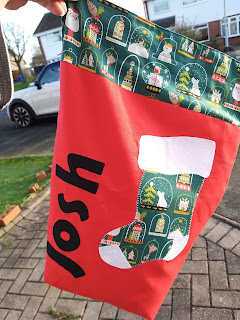 When I made those original Santa Sacks, I only had Mia and Jess. We knew that we wanted to have a third child, but obviously we didn't know whether it would be a boy or a girl. So I made sure I had enough matching fabric in case we had another girl. Well, it's just as well we didn't cause I have no idea where that safe place is that I put that fabric! And it was just a bit too girly for Josh anyway. 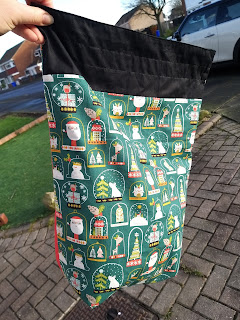 Last Christmas I picked up some green snow-globe fabric. I ran out of time (and inclination) to make the Santa Sack last year (Josh had a pillowcase on Christmas day, but at 11 month's old I got away with it. He's a bit more savvy at 23 months, so I had to find time and inclination this year!) I paired the fabric up with some plain red, and added in black and white, and then did the same design as I did for the girls - a raw edge applique stocking, and raw edge applique names, though Josh's is in a different font. 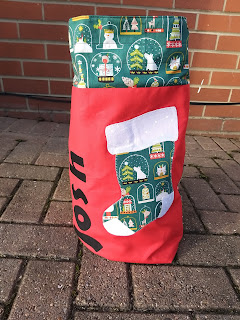 The drawstring is made using this tutorial from Jeni Baker, but I adjusted the sizes to what I thought looked right. These photos were taken without the drawstring, because even though I ordered it in plenty of time, it didn't actually arrive until Christmas Eve. 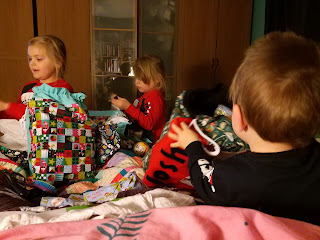 Pleased to have this one ticked off my list: it was filled with lots of lovelies on Christmas morning and I'm sure it will be loved for many years to come.

p.s. if you read the blog post I've linked to about the girls' santa sacks you'll see that the cord I bought wasn't quite long enough and I was going to swap it out for next year.... four years later and I still haven't done that!