All of blogs I've been reading posted by Australians are takling about spring being in the air. Here in the UK Autumn has been in the air for months (possible because we missed summer!), but over the last few days it has started to be properly autumnal and quite chilly.

I've been working on two separate sampler quilts this week. The first one is the Nikki Tinkler Sampler Quilt. I'm working on this as part of a group at our local patchwork shop and this weeks class was looking at different ways of setting the blocks and final construction. The book is 25 blocks and everyone has done a different number. I'm determined to complete the full 25. After this week's push I only have three left to do - I need to finish one called Tobacco Leaf. This block isn't in the book, but I really didn't like the Hawaiian Hearts block, so this is my replacement. It's started, but not finished. I then need to repiece Mowhawk Trail. I have already done this very early on the process, but since then I have changed the colour scheme of the quilt slightly, so this need to be redone. I then need to do the Dresden Plate block. This is another one that isn't top of my favourites list. I have started it, but I can't find what I've done with it - very annoying.

So here are the three completed this week: Bear's Paw: I originally did this block as the second block of the quilt. But it doesn't fit the final colour scheme, so I've repieced it. For some reason I struggled to get the points to match. The origianal one may still get used, as I think I might make my quilt into a quillow - then I could use this block as the cushion front, and maybe make some of the other rejects into "matching" cushions. 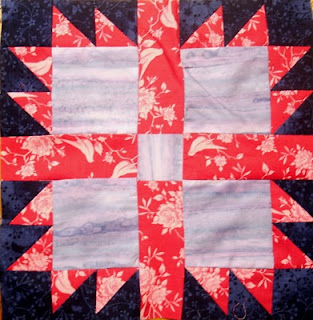 This is Rocky Road and is another of my own replacements. The original block in the book is called Rocky Road to Kansas and is the same shape as the block I've made (but not quartered), but the triangles coming out from the centre are crazy patchwork. My colour scheme didn't lend itself to crazy patchwork, so I did this version - it mirrors the original and I love the circular affect it gives. 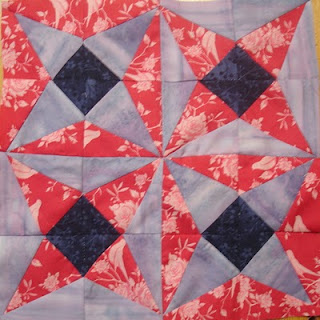 Finally I remade the Trip Around the World block (another victim of the changed colour scheme). Don't you just love blocks where the first instruction is "take template A and cut 121 squares" - 121 pieces. Don't look too closely at some of the corners. 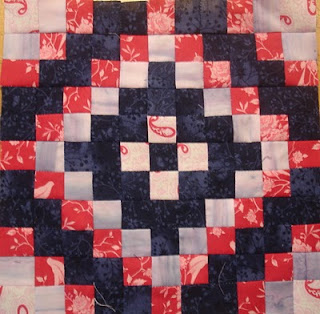 Once the three remaining blocks are pieced I need to get on with the quilting. I'm doing quilt as you go, but haven't really quilted as I've gone. That means I have loads to do. Yesterday I got some pointers on hand quilting, but I can't get my stitches to look the same top and bottom - I still need some more practice.

The second sampler quilt of the week is, of course, my Farmer's Wife Quilt. Because of progress on the first sampler quilt, I've only managed two blocks this week. This brings me to 30 in total, so I'm only two behind!

#55 Linoleum. This block would have been a lot easier and quicker if I had paid slightly more attention to this, rather than Liverpool getting humped by Tottenham. I managed to stitch pieces together the wrong way round. Twice. Duh! 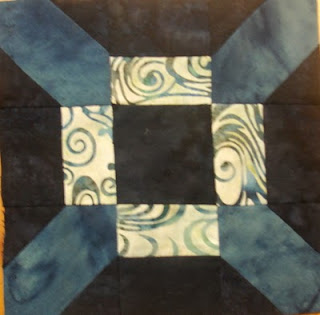 #52 Hovering Hawks. More yellow! I liked this one - still not one of the most complicated. I paid attention to this one and it went together much easier. 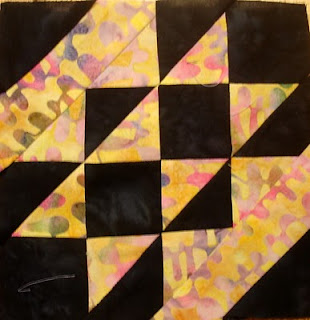 Some embroidery this evening, I think.
Posted by Jennie at 19:28