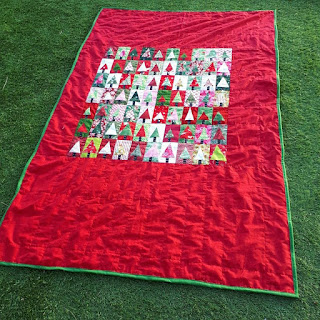 This is a quilt that was a year in the making. Last December, improv Christmas Trees were all over Instagram - a tutorial by @diaryofaquilter and I couldn't resist joining in. I made six blocks using the smaller sizes provided. I thought they'd make a nice cushion. Then I made a few more blocks, and then some more and then I had 76 small Christmas Tree blocks. And then it was Christmas. Those 76 blocks helped push me over my target of 1000 blocks in 2016. But once Christmas is over, the last thing I wanted to do was make them into something, so they have sat in my bedroom all year. I knew exactly what I wanted to do with them! 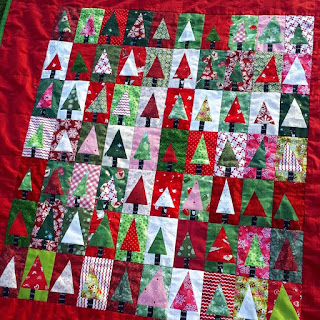 In the last few months, I finally got round to ordering the minky I wanted to put on the back - red, of course. I pieced the blocks into a usable panel. And I bought some red for some wide uneven borders. It only took me an hour to get a finished quilt top. Then the fun started.

This was my first time playing with minky and it.is. slippy! I chose not to add wadding to this quilt - I didn't want it to be so warm that we couldn't ever use it! So just two layer to baste. But the spray baste wouldn't hold it. Every time you breathed near it, it moved... I resorted to pins (helpfully borrowed from a friend) and together we pinned it so it couldn't move even if it had wanted to! I was expecting the quilting to be a bit of a mare, but I have to admit, it went easily and quickly - no swearing at all. I quilted in the ditch between the Christmas tree blocks, and carried those lines out into the negative space of the border. I also added a couple of extra lines in the widest border - all in bright red thread. 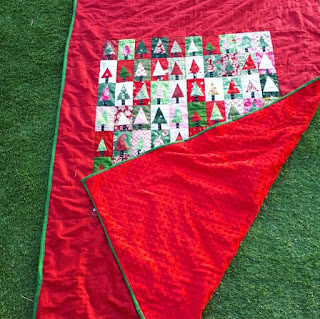 In fact the biggest challenge came with the binding - a green fabric from the same range as the red. I nearly always machine sew the binding to the back of the quilt, then bring it to the front and top stitch it in place. And that's what I did. But here the slippy caused issues - it moved more than regular quilts, and so my top stitching line is not as good as I would have liked. But this is a quilt just for us, for the sofa. And it's already being used and loved! It finishes at 68" x 41" - a bot of an odd size, but that's just how it worked out!

This is a finish from my Quarter 4 Finish Along List

It's a fun Christmas quilt. xx

Love this quilt - so glad it is already in use! Thanks for taking part in the FAL - from the FAL hosts!