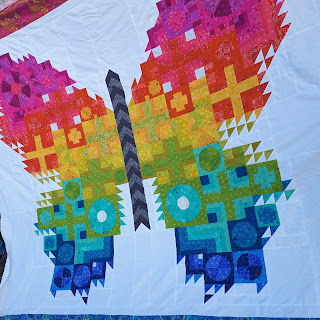 So looking back through my blog history, it would seem that I haven't mentioned this project here before, so let me explain. Ever since I saw this quilt, I've wanted to make it, but getting hold of the pattern in the UK seemed impossible. Earlier this year I won a $25 voucher to a Canadian fabric shop, and they had it in stock. They were able to do me a good deal on the postage and so it seemed like a very good use of my voucher. And then @Gnomeangel announced that it would be a quilt along starting in August and ending in December. I decided that this would be the perfect quilt for an Alison Glass rainbow so I started stock-piling fat quarters - such a pretty rainbow! 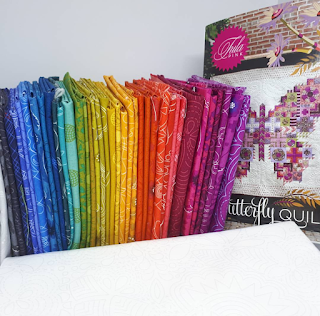 You can just about see the background print at the bottom there, too.

The quilt along started just before a number of other quilt alongs finished, and just a day before we went on our summer holiday. I worked really hard before the holidays getting a couple of quilts finished, and I came back with a lull in my enthusiasm, so inevitably I fell behind. But the quilt is made up of lots of smaller blocks, sampler style, and in the most part these are quite straightforward, like these dinky log cabins (these weren't even the smallest). 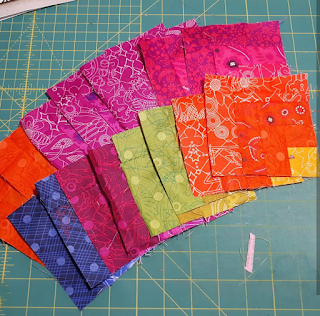 But with some curve blocks snuck in at the end... 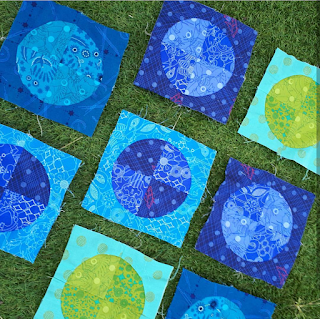 I was determined to have a finished quilt by the deadline of 3rd December, and I finally got caught up in mid-November. I spent a couple of hours grovelling round the floor of the hall where we have our Monday sewing group, trying to work out the layout, get all the half square triangles in the right place, and add the right sized piece of background to the right section. 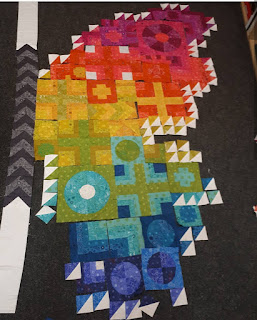 At this point I did doubt the blocks with the white/pale grey in them, but I was confidently reassured that they helped add to the look of fragility of the wing... Then came construction. None of the hated sashing, just lots and lots of sections, without either a design wall or a floor. I had two mammoth piecing sessions on a Saturday night and the following morning, and by lunchtime on 3rd December I had a finished quilt. I added additional 2.5" borders in the background fabric all the way around, so that I don't lose triangle points when I add the binding later. And then the two long borders top and bottom are from Alison's Diving Board range. 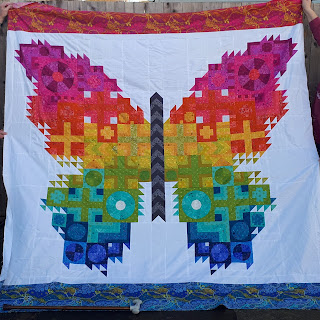 This quilt top is huge - here's the uncropped version with Mum and Dad doing the honours to give you an idea! 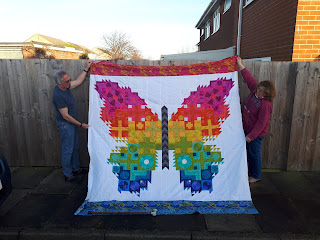 I've now packed it away until the new year. Whilst this was on my Q4 Finish Along list, there is not way that I will be able to get this quilted by the end of the year. I think I've just added the first thing to my Q1 list! I also still need to pick a backing fabric, though binding is already sorted!
Posted by Jennie at 16:26

I love that you used the red and blue fabrics for the top/bottom borders to continue the colour progression. Well done on finishing it!

Oh my, that is big! Stunning though, I love it. xx

This is beautiful. Congratulations on selecting your own color palette. I have no confidence doing that. The results are fantastic. Thanks for sharing.

It's beautiful and I love the white in the wing sections! I had no idea how big this quilt was until I saw the photo of it with your mam and dad!