The Farmer was feeling neglected

Back in July I joined the Farmer's Wife Quilt-along on Flickr. I picked my fabrics: black and batiks. I bought the book. I printed off the paper piecing patterns, and I made my first five blocks. As part of my Nikki Tinkler Sampler Quilt we had made a Mariner's Compass block at the Fat Quarters: instead of messing about with tiny templates, Kim introduced us to Paper foundation piecing. I loved it - I have grown to hate templates and this was a way of avoiding them and getting neater seams, so I decided to do the Farmer's Wife quilt using this technique.

I raided my stash, which is still in its infancy, and pulled out seven blue batiks and one pinky-red one. I added a few from the Fat Quarters and successfully pieced my first five. You can see these in some of my earlier posts. For my sixth block I chose block number 24 "Country Patch". I don't know whether it was the number of small pieces or my colour choice or the two combined, but me and the Farmer had a falling out. And it got put in a box and I went on holiday.


I didn't forget my Farmer entirely and we visited a couple of patchwork shops on the holiday where I added to my fabrics. Then last week, Linda bought a me a pack of 20 8" squares all in batiks. Yesterday I visited a new patchwork shop and bought three more fat quarters of beautiful batiks. I was inspired! In the last 24 hours I have made another seven blocks for the Farmer (though "Country Path" remains in the box in disgrace). Here they are:


Block #29 Economy: The red fabric came from Threads and Patches 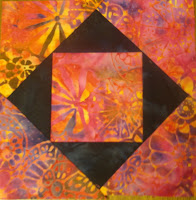 Block # 2: Autumn Tints: both of these batiks came from the Calico Barn in the pack of 20 8" squares. I wouldn't normallly have put orange and purple together but they just worked. 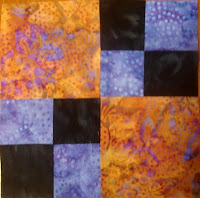 Block # 10 Bowtie: the green is from Threads and Patches and the pink is from Calico Barn. 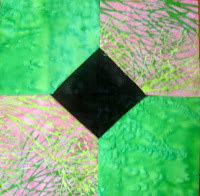 Block #16 Calico Puzzle: both of these fabrics come from Calico Barn. 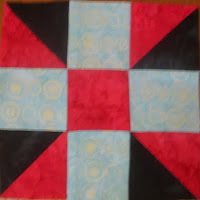 Block #46 Hill and Valley - kind of. I was putting it together and didn't like the way it was going to work when I put it on point, so I rotated the bottom right half by 180degrees. I much prefer it, but may still do it the way in the book to replace the basket blocks (which I really don't like). 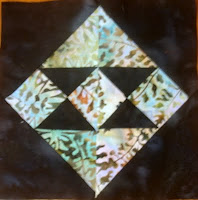 Block # 73 Rainbow Flowers: The cream is from The Fat Quarters and the green with flowers and the purple/green are both from Calico Barn. 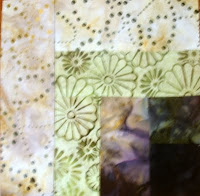 Block # 97 Waste Not: The green/orange is from Threads and Patches and the red/pink is from The Fat Quarters. 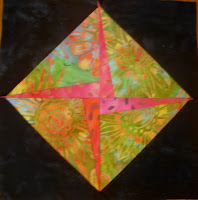 Hopefully my farmer is feeling a little less neglected. 12 down, 99 to go.


I've also made some progress with the Nikki Tinkler Sampler Quilt this week: I've piced Castle Keep (which did not want to lie flat) and Quilters Dream: 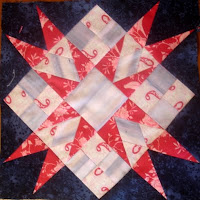 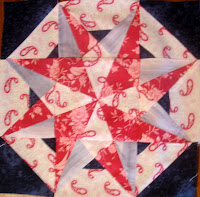