So here's the plan - this will be a quilt for baby. That gives me until February. Which is good because the last block doesn't come out until 1st December. But of course, it's not that straightforward. I want to set my blocks on point, because there are 13 in total, with last December's "practice" block.

So I drew it out and the finished quilt just wouldn't be big enough. So I need to add in another 5 blocks. I'm already picking them out of the Carol Doak's book. But in the meantime I need to get caught up on the blocks already out there.

So here are this month's block - I had to do it straight away. 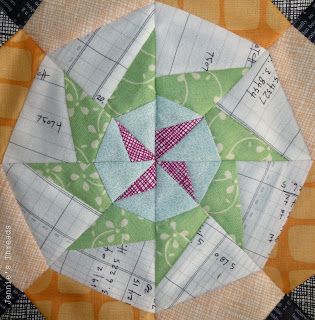 And the May block, which is made from 16 pieces and I may have been putting off.... 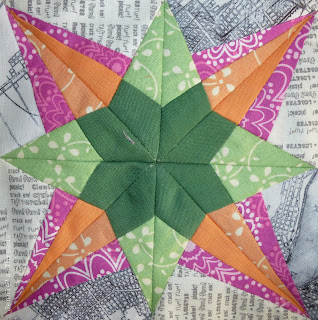 10 down, 8 more blocks to go. And the challenge of picking fabric for sashing, setting triangles, border, backing..... oh, and I might redo the January block. I don't like my version and it's only 4 pieces!
Posted by Jennie at 18:16

Gorgeous blocks - what a lucky baby!

Lucky baby - that will be a gorgeous quilt!

It is going to be a beautiful baby quilt.