WIP Wednesday [Patchwork of the Crosses]

It's been a slightly sparser week in terms of blocks this week. I was really pleased that I was pretty much up to date on the Farmer's Wife blocks, with the exception of a few that I want to replace. Then I ran out of the white fabric I've been using. I sent a sample off to the shop I bought it from, discovered it was Makower 001 plain white, and asked for 7 metres (I have a sashing plan that is fabric hungry). The shop didn't have 7m but promised me a trip to her wholesaler this week. Unfortunately it seems that the dye has changed and rather than being a slightly off-white white, which I've been using, it's now a white white. Bugger. So I've bought the half metre they still had in stock, and I've taken a risk on some Ebay fabric - the listing said only 3m left so I'm praying it's an old bolt and is still the off white (if it isn't then 3m of white fabric is hardly going to go to waste...). And then once I've pieced the blocks, I'll have to rethink the sashing plan. Fingers crossed. In terms of falling behind, the schedule has changed to just one block per week, so catching up is still feasible if I can get the fabric.


I haven't pieced a single #365quiltchallenge block. And this could be the week that I finally slip behind. It's been close the last few weeks, but I've always managed to get the blocks done for the weekly link up on Facebook, though often in a piecing frenzy in the last couple of hours, rather than one per day. This week.... not convinced that will happen.

So what have I been doing? Well, Saturday was lost to a nasty sickess bug. And then I'm nearly full term with this baby, so a fair amount of my time has been spent sitting on the sofa feeling uncomfortable. In between I have finished piecing the individual units for Baby's quilt, but I haven't yet pieced them together in a top. I reckon just a couple of hours and I'll have it done. But I haven't done it yet! 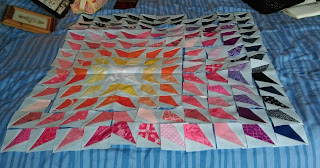 And, as you may have guessed from the title of the post, I have been working on my Patchwork of the Crosses blocks. There's something very 'right' about working on this project. I first blogged about it on 8th March 2014, just two weeks after Mia was born. It was my new pick-up-and-put-down project for nap-time sewing. I'd decided to have a go at nine feature blocks and scrappy sashing. I'd cut all the fabric for this plan. Two years later, and with another imminent arrival, I returned to this project and with some encouragement from IG and Facebook I've decided to keep going. I'm aiming for 25 blocks now. So on Tuesday I cut all the greys for the scrappy sashing for another 8 blocks, and I have this gorgeous pile of fabrics waiting to be cut for the blocks themselves. 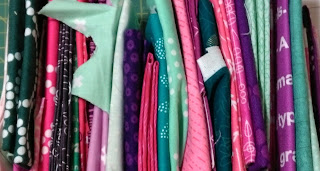 And here is progress so far - I've even managed to find all the completed blocks for this photo! 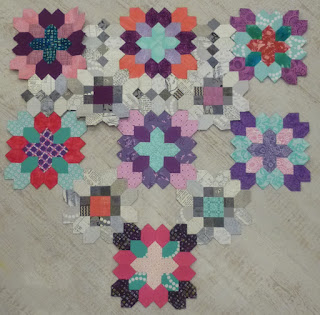 Not sure how many more pregnancies and babies I'll need for a lap quilt, but we'll see how it goes!

And I've cut another 10 blocks worth of fabric for my Trapies project. I'm not sure I need another ten blocks to get to cushion size, which was the original plan, but I kept finding fabrics. Another EPP project with no end in sight! 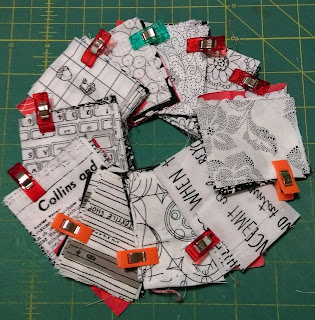 I hope this isn't the inevitable slowing down in block production - chances are Baby is quite comfortable where she is, just like her sister was, and will not make her appearance for a couple of weeks - I'd like not to be sofa bound until then. On the other hand, she is more than welcome to arrive at the weekend! And if she does, I'll finally stop talking about being pregnant, which I'm sure will be a relief to you all. Instead I will spam you with Baby photos!
Posted by Jennie at 20:31

I hope you have enough time to put the stitching down and have the baby - lol! Good luck and hope everything goes well.

You have more than enough reasons for 'falling behind' in a qal. Enjoy the sofa time and count any time spent stitching as a bonus ☺

I still can't believe how productive you're being!!

Hi Jennie - oh I'm definitely not bored of reading about your pregnancy! But seriously, I'm sure you're smart enough to realise that your fabrics are not going to get up & run away just because you slow down for a bit on your sewing...
x