I know that the WIP Wednesday link up isn't happening any more, but I'm going to try and keep up with it, as a prompt so that I do actually blog. One of the reasons I'm blogging less is because a lot of the sewing I'm doing at the moment is 'just' blocks, and I worry I might bore you. But this blog is as much for me as for you, so prepare to be bored during this year of the block. On the plus side, at some point, next year (or more likely the year after) there'll be a few (hopefully) fantastic quilts coming out of this block drive!

First up my first block for a new project. A few years ago I came across the Basic Grey fabric line 'Sweet Serenade'. I liked it, but it's not very me. But that didn't stop me buying a few fat quarters. It then struck me how perfect it would be for a good friend, who in making her subtle hints about a quilt had mentioned "beach colours". I'm pretty sure that the blue is sea-y and the peach from this line is reminiscent of cliffs... and the music theme in this line is also perfect. 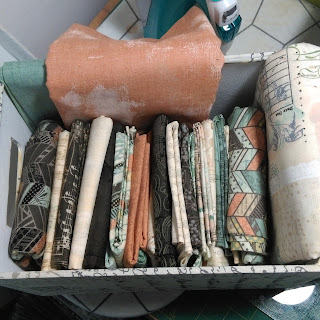 About the same time I came across an online sampler quilt called the Jane Austen Family Album Sampler Quilt. I'm not sure whether the friend I have in mind is a Jane Austen fan, but I am so I'll enjoy that aspect as well. I made sure I bought enough fabric at the time to finish the quilt top. But that quilt along finished in December 2014. I've finally got round to starting it today. 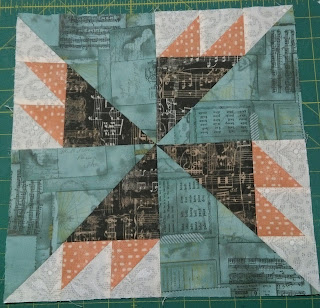 This first block is called Shining Star and is for Jane herself. Rather than following the cutting instructions, I foundation pieced this block in quarters. I had to buy a new iron yesterday and I don't think it's as hot as my old one, as I struggled to get the freezer paper to adhere to the fabric, which made it a little frustrating. But I'm pleased with how the block looks finished.

I've been continuing to work on my Farmer's Wife blocks, but have shuddered to a bit of a halt. First up, here are some of my recent blocks:

I have now nearly caught up: there are three blocks outstanding that are flowers or baskets, which I need to replace with more Jennie-friendly blocks, but apart from those, I am now back to working alongside Angie's quilt-along. But I've run out of the background off-white. I thought it was a Kona. Not so much. So I've sent off a scrap to the shop where I think it bought it from and I'm crossing my fingers they are able to match it. If they can't I do have a back-up plan. I have two metres of a similar off-white. It's so close that sometimes I think it's the same colour, but I'm not 100% sure. So I'd rather not use it if I don't have to. I think these 2m will get me through the remaining blocks, but it will mean changing my plan for the sashing. Watch this space...

And I've made two more Splendid Sampler blocks. I haven't committed to making all these blocks - just the ones I like. This is Simple Simon 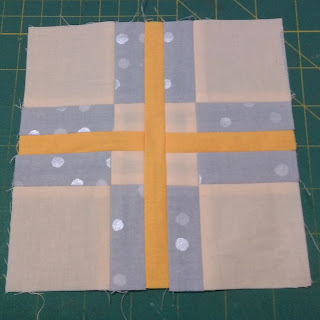 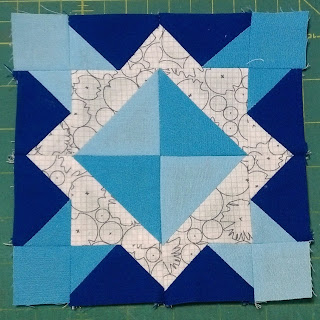 I had a bit of a whoopsie when I was cutting for Focal Point and mixed up the cutting instructions for the dark blue and the white. Rather than re-cut I went with it and I really like how it ended up. The next block is an embroidery one. Rather than make it for the quilt, it will be perfect for the nursery in an embroidery!

And finally I have been keeping up with the #365quiltchallenge blocks:at the end of February I was surprised with the release of the pattern for the centre medallion. It was a bit of a sod: partly because of the cutting instructions requiring accuracy to a sixteenth of an inch; and partly due to my own stupidity. Remember... when foundation piecing, the patchwork comes out as a mirror image to what you are intending. And because I went for a scrappy centre, this mattered. My colour wheel will spin the opposite direction to intended in the final quilt.

I love your block update posts and am not in the slightest bit bored, so please carry on! I hope you solve your white fabric dilemma!

P.S. Is the fabric for the beach quilt unwashed? I find that can make a difference to how well the freezer paper adheres to the fabric, maybe because of the sizing?

I agree! Blocks aren't boring and neither are your posts 😀

Oh a WIP Wednesday sounds like a great idea - I'll join you!
I never tire of seeing your blocks ... just think of it this way, if this year is your year of the block, next year may well be your year of Magnificent Finishes, Jennie...
"Perfect for the nursery"... ??? are you having a boy ???

I always enjoy seeing your blocks Jennie and I love your 'beach' theme colours - it's going to look gorgeous. xx