A rather imperfect Stitchy Pie

Back at our February meet up of the North East Modern Quilt Guild, we decided to make  up Stitchy-Pies as a group - it was a pattern a few of our members had expressed an interest in, and a couple of people had the wherewithall for adding kam-snaps, so we all bought the pattern from the lovely @charmaboutyou and set a date.

I am quite lazy, I'm not going to lie. So I generally take hand-sewing to guild so I don't have to lug my machine and associated stuff. As such, I decided to make up my Stitchy-Pie the night before: that way I had a finished one to show anyone who was interested, and for reference to see how it folded up. And also to warn against any errors.... by which I mean my errors, not errors in the pattern, because there aren't any! 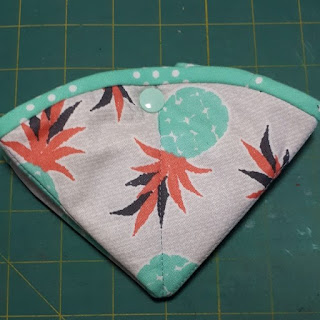 The pattern is so easy to follow. I skipped the embroidery because I had a funky pineapple fabric I was desperate to use, and within an hour I had a Stitchy-Pie in need of some hand-sewing - another hour later and it was finished. If we could all please ignore the slightly off-centre felt inside - I'm not quite sure how that happened. 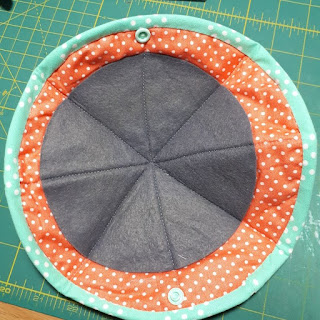 Remember I said I was lazy? Well that was my user error - the Stitchy-pie is finished off with bias binding, which if you pin it, like the pattern says, will lie beautifully. But if you don't pin it, like I didn't, when you add it, it stretches. And then you have a Stitchy-Dish rather than a Stitchy-Pie.... a considerably amount of tender loving pressing (and steam) later and it is now flatter, if not flat!

It's a lovely little needlecase, and, made correctly, would make a great gift for a sewer! My advice - don't rush, and don't take shortcuts!
Posted by Jennie at 21:00