I have to confess that when I first wrote my Finish Along list for this quarter, I wasn't sure if this project would actually be made, let along be one of my first finishes! But here is my finished Sewing Date Traveller! I first came across the pattern at the start of the summer and mentally added it to my list of one-day-I'd-like-to-make things. Then at the Sewing Shindig, I saw a few in real life, and it was added to the list for certain. I'd already picked up some Essex Yarn Dyed Linen with this project in mind, and the Shindig weekend convinced me to use Tula Pink's Zuma for the rest of it. This can be blamed on @rosedahlia who made a beautiful Sew Together bag in Zuma over the weekend, and Olive and Flo Handcraft who had a pop up shop with, you guessed it, Zuma! 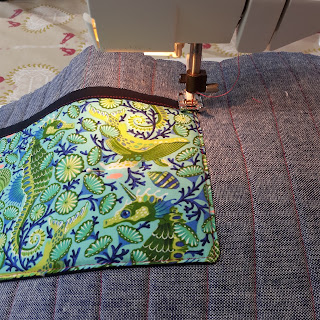 The interfacing on this project scared me a bit - and was the main reason I wasn't sure it would get done. The pattern  (which is free!) calls for Pellon 65 which I couldn't source in this country. It was suggested that Soft and Stable would be a good alternative, but that's not cheap (for the 2m called for in the pattern, the price was heading towards £50!). I did some research at Shindig, and felt up a few bags and baskets, and decided that Bosal R was very similar. And much cheaper. And wider, so I needed less of it! Winner! I bought a meter for under £17 and maybe have enough left to make another one! 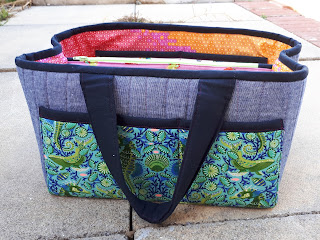 I cut all the fabric and interfacing out before our NEMQG Retreat, and quilted the outer panels in organic lines in pink thread. This meant when I arrived on retreat I was ready for construction! My machine was not keen on multiple layers of the interfacing, and I swore quite a lot, but a change of needle helped (quilting needle). I managed to get my top-stitching finished neatly and all the pockets attached. However, the side seams and boxing seams were a bit of a nightmare.... the centre zipped pocket also has Bosal R in it, making it very stiff and hard to get accurately under the machine. If I made this again, I would use a heavyweight, but not foam interfacing for this pocket, as I don't think it needs as much structure, but those seams do need to be better!

I had a bit of an issue with the handles... as in I didn't cut the fabric correctly and didn't bring it with me to recut. Luckily the binding fabric is cut far longer so I had plenty left over to patch the handles, and actually ended up making them about 2" longer than the pattern called for. I didn't however, making the interfacing in the handles longer, which means where the handles meet the bag and are sewn in the lining, I was one layer of Bosal down on what I should have been, which I think allowed for a much tidier finish at this point. Definitely a "mistake" I will be repeating should I make it again! 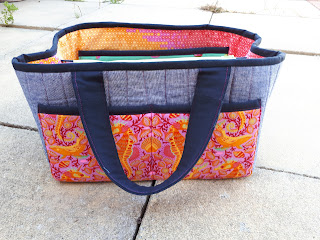 The lining was a bit large for the basket, but I folded it down and tacked it in place before adding the binding, which in turn made the binding much easier to attach. It's finished off by hand sewing the binding on the inside. 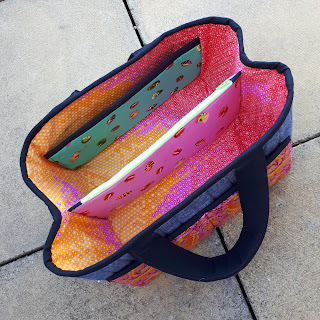 I love it! I can fill it with so much crap. It's easy to carry, and feels sturdy. It was like I gave myself a present and I'm already using it. And whilst it seemed like a big make when I first started, the techniques are straightforward and once prepped, it only took me maybe 6 hours to get it all together. Whilst I said at the time, I would never make one again, a few days have now passed and there may well be more in the future. There are also great opportunities for personalising it, especially on those external pockets!

This is my second finish of the quarter - you can find my original list here.

This looks great, and so useful! I love your colors.

I love it! Hooray for finishes! *waves pompoms*

Increasing the fabric design of your hand bag is good.To get more design in weaveron textile click on this link....:https://www.weaveron.com