You may recall that for the last two years I've participated in the Instagram-based quilt-along for Tula Pink's City Sampler hosted by Gnome Angle. The basic premise is that that you post a block a day from the book in order each day for 100 days. And of course by day 100 you have a pile of 6" blocks! The 2016 blocks remain in piles, unsashed and unfinished. However,the 2017 blocks were finished quite promptly after the end of the sew-along as Christmas quilts for Mia and Jess. The 2018 quilt-along started in July when I was feeling particularly rough with this pregnancy, but I forced myself to join in - it was the push I needed to do at least a little bit of sewing, and I figured that by the end of Summer, my energy and sewjo would be back and I would regret not joining in. My energy and sewjo are only just coming back now, as we post our final blocks, but I don't regret joining in at all. I'm glad I did some sewing over the summer! 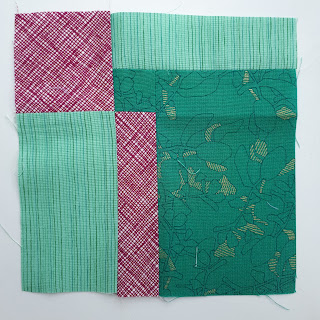 Rather than start a new project, which I knew would get me in trouble with The Committee, I decided to earn some brownie points with The Committee and use this opportunity to make progress on a quilt I started *a while ago*.... I've looked back through blog posts and it would seem that this start was pre-Mia - January 2014! I started making 6" blocks in Architextures and Botanics fabrics by Carolyn Friedlander. I made 28 blocks using patterns from a variety of sources, and then didn't touch them again. 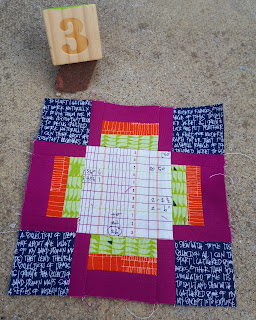 But 100 days after picking them up again (and adding in some of Carolyn's later fabric lines), I now have 130 blocks and this layout. And it's all pieced! I confess that I didn't love it at first, but it's definitely growing on me! 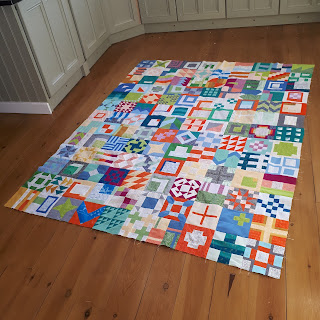 Now all I need to do is get this quilt finished - pick a backing, buy some wadding and quilt it! Not adding sashing definitely helped me get to this point. And it's on my Q4 Finish Along list!
Posted by Jennie at 20:30