It's Wednesday again, so what have I been working on the last few days?

Last week, Rachel at Stitched in Colour, announced Scrap Attack: String Fever. This was perfect timing for me.  About eighteen months ago I agreed to make a quilt for my Aunt, and she picked out the fabrics - blues and pinks. Then the fabrics sat in a box. And stayed in the box. I wasn't really sure what to do with them. I wanted something traditional, but modern, that would keep me interested (I get bored easily of the same block again and again if it isn't challenging enough).

Then at Christmas I was given Hexa-go-go by Tacha Bruecher and I had a light bulb moment when I saw the quilt on the front cover. And Mum agreed that she thought my Aunt would like it - I did ask my Aunt last summer what she would like, and she said she trusted me and to do what I liked - Aunty Catherine, if you are reading this and don't like it, that's the risk you took :)

We checked the fabric I had on hand, and realised I needed more of the dark blue fabric. By some miracle it turns out to be a standard Hoffmann Batik fabric that is repeated (like Kona), so I was easily able to pick up some more. I've also added in Kona Snow. 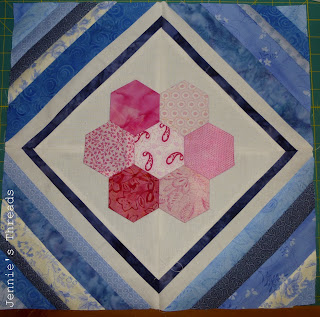 I now have block one of thirty-six...


I'm linking up with WIP Wednesday and I'm off to check out some of the other links.

Your quilt is going to be gorgeous - hexies and strings - how wonderful ;) I'm sure your aunt will love it!

well ... that means you only have 35 to go... well done x we are all cheering from the sidelines xx GO girl x

You can do it Jennie! We'll be cheering you on. That's a great block!

It is going to be a great quilt! The strings and hexies together are so cute, and the colors are really fun.