...and evidence that the Finish Along works! There is no way I would be writing this post if it wasn't for Rhonda and Leanne.

I started the quilt in question 14 months ago. The fabric is the Durham Range from Lecien and it is beautiful! The pattern is fat quarter friendly from Turning Twenty by Tricia Cribbs.  The pattern was for twenty fat quarters. I used nearly double this. I did all the cutting and about 10% of the piecing and then put it in the box because I was bored.

It first appeared on my Finish Along list last year in Q4 and I didn't touch it. But I meant I thought about it - that's good, right? In January it went back on the list and I got it back out of the box and spent over an hour trying to work out where I was at. Eventually I worked it out and started chain piecing. And pressing. And chain piecing. And pressing.... the borders nearly tipped me over the edge - I hate long seams. A unexpected trip to Budapest in March meant that the quilt didn't get finished for Q1. But even so, I would never have even got it this far without that push

I got the 116" x 116" monster basted at Easter with help from my Mum and then dreaded quilting. 6 hours and 22 bobbins of thread later and it was done. And theoretically I could fit a larger quilt through my machine! I think I'll stick with the theoretical! 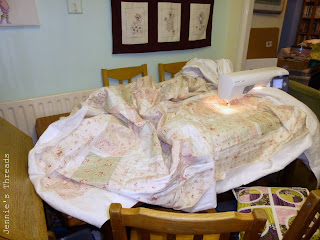 Last Tuesday I borrowed the Church Hall  and trimmed it. Last night I made 500" of binding and today I stitched it on! 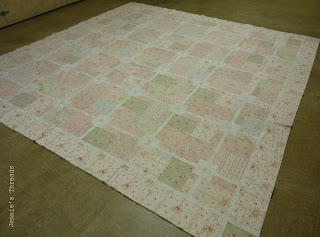 I know I should label it, and that may happen. But for now I'm declaring it finished! And I will be linking up with the Finish Along! 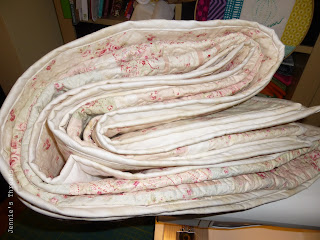 Good for you! It is a wonderful huge quilt!