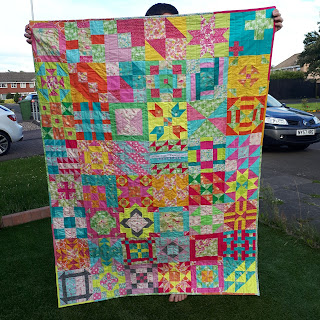 I started this quilt on a bit of a whim. I'd been watching the build up to the quilt along for the Fussy Cut Sampler Quilt book on Instagram, and I'd had a look at the book on Amazon a few times and just not committed. Then, on 31st May,  the day it started, I'd had a long day at work and just needed to relax. I saw the first block pop up and I liked it. I made it, without the book, based on the knowledge that the blocks were 9" finished and the good fortune that the block was very straightforward. I ordered the book as soon as I'd finished. I had to make blocks 2 and 3 the same way because my book hadn't arrived... 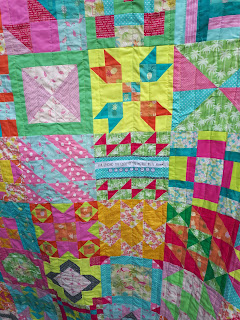 The book arrived in time for block 4, and it was beautiful. A really lovely book - detailed information on techniques and beautiful photos. It made me look at fabric in a different way - fabric I thought was not a fussy-cuttable fabric, suddenly was...


I am not a fussy-cutter. I don't have fussy-cuttable fabrics (at least I thought I dind't). I made my first block with the fabric nearest to hand given the impromptu nature of the start. It was only after I'd finished piecing it that I realised these blocks may lend themselves to a fat quarter bundle I bought last summer. Pineapples, flamingos, bright colours, palm trees. What's not to like! I added in some other fabrics from my stash - but apparently they are weird colours, so I didn't find as many as I would have liked. 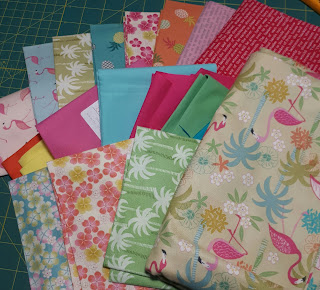 Because I hadn't planned to make this quilt, I didn't have the opportunity to make the blocks ahead of time - mostly I was making and posting them on the same day - the book is split into chapters of four blocks, and each Tuesday, Wednesday, Thursday and Friday you had to post that week's four blocks to be eligible for any prizes. I am pleased, and slightly surprised to say, that I managed to post every block on time. Sometimes by the skin of my teeth. Most of the way through the quilt, I was a maximum of 3 blocks ahead at any time. 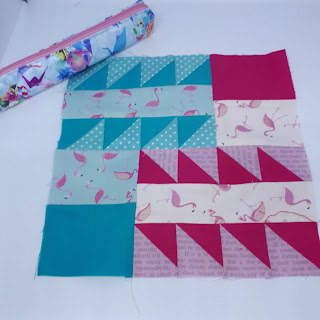 I bought the fabrics on holiday in Sidmouth in August 2016, and at the start of July I suddenly had this ridiculous idea that it would be great to take the finished quilt with me this year - to show the lady at the shop! As the quilt along wasn't due to finish until mid August, that meant getting ahead. After a mammoth cutting out session (and eeking out the very last of quite a few of the fabrics) I got all the blocks pieced by 29th July and I laid them out on the church hall floor. We were due to go away on 2nd August, and I knew that if I decided to add sashing, this would never be finished in time, and possibly not for a long time - I would lose momentum over the holiday and I hate sashing, so would probably ignore it for a lot longer. But if I didn't use sashing, there was a chance: Both of getting a headache when looking at the quilt, and of finishing it in time. I took the risk and went no sashing! And I love it! It totally works. It's crazy, but there's enough variety in the blocks, that I get away with it. That was Saturday night. 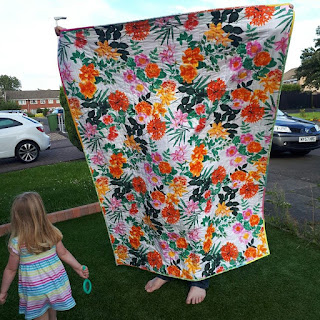 Sunday morning was early, thanks to my daughters, and they decided to help me baste the quilt. First up, I didn't have enough batting, so I made up some Frankenbatting using an off-cut from a previous quilt and a wide zig zag stitch on my machine - you can't  tell in the finished quilt, even after a few washes. The backing is an Asda duvet cover (shown above) - the other side of the one I used on my long time gone quilt. It's also pretty crazy! Can I just say, that if you don't like basting quilts, you can borrow my daughters to help you. Once you've basted a quilt with them, you'll realise just how delightful a process it is to baste a quilt without them! 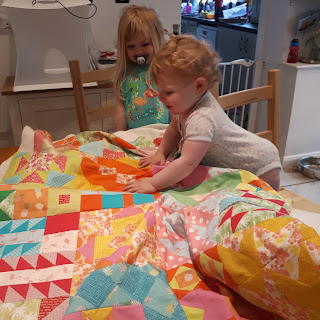 And then I quilted it. "Straight" organic lines, about 1-2" apart, down the length of the quilt. With help. Jess was absolutely mesmerised by the sewing machine! I bound the quilt using whatever scraps I had leftover. Perhaps more than any other quilt, I was right down to the last few pieces of fabric (except for one, particularly ugly coloured flamingo fabric, which I seem to have bought 2m of... obviously thinking quilt backings for baby quilts when I originally bought it!). 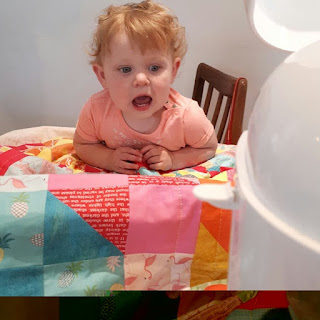 And it was done. Amazing what I can achieve when I set my mind to something! The finished quilt is 56" x 72" and made of 48 blocks. I found I was increasingly fussy cutting as I worked through this book, not just for this quilt, but paying more attention in other quilty projects too. I definitely plan on making this quilt again, and next time I will be fussy cutting. I'm already starting to curate my stash in that direction a bit! And the best bit - Mia demanded that she have it on her bed when we were camping - I think she love it as much as I do! The picture below was the reaction on Sunday afternoon when having watched me work on it all day, she was finally allowed to cuddle it/play with it! 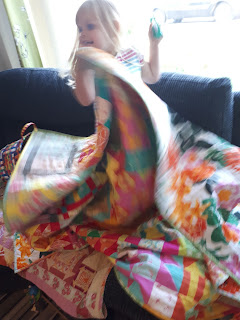 This quilt was optimistically on my Finish Along list this quarter! Miracles do happen!

It's magnificent! *waves pompoms* I wonder how many more finishes you'll manage before the close of the quarter?!!

Lucy | Charm About You said...

What a gorgeous and happy quilt! Fussy cutting is definitely addictive when you get going :) Thank you for participating in the FAL, on behalf of the 2017 global FAL hosts.