I'm back with another make from the Stitched Sewing Organizers book by Aneela Hoey as part of the #stitchedsewingorganizerssal hosted by Tuppen Ha'Penny Quilts. And the more I use this book, the more I love it! Last week was another week I was going to skip: fabric trays. Not very inspiring at first glance, to be honest. Then I started seeing them pop up over on Instagram. On Saturday night, after a rather hrad 24 hours, and with the kids finally in bed, I decided that rather than the many projects I already had on the go, I was going to make these instead. 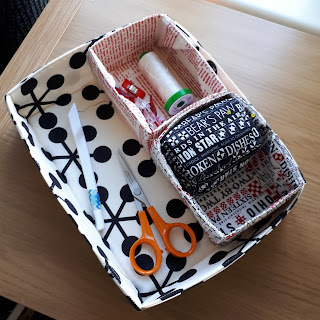 I cut into my new Comma fabric. I was lucky to get rather a large piece of the black asterisk (?) fabric as part of #getyourquiltywishesgranted3 along with quite a few fat quarters, so I felt I could spare a piece from my quilty plans (still early days...) to use for this project. I matched it up with a couple of prints from Mama Said Sew by Sweetwater. In an ideal world, it would have been nice to use these fabrics for all of it, but the large tray needed more than a fat quarter, and that was all I had. It's a good thing they play so nicely with Comma!

Literally an hour after starting, minimal machine sewing, some time with an iron and interfacing, and I was sitting on the sofa finishing these trays up by hand. And they are perfect for sofa sewing - everything is kept in one place, and everything is accessible. I predict these will become one of my organising staples! And I couldn't resist adding a matching pincushion as well.... 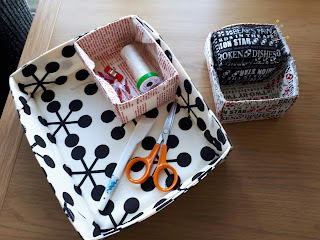 The next few weeks of the sew along are for projects I'm desperate to have a go at, including the cover project - the reason I bought the book! So I will be back!
Posted by Jennie at 20:30