I'm back with another week of the #stitchedsewingorganizersSAL and this week it's the "See-it-All pouch". This is another of the patterns I was really drawn to in the book so I was quite excited. I decided to kill two birds with one stone and use this pouch as a gift for my Aunt-in-law. About a year ago (I think) I made myself a zippy pouch with the word "Always" embroidered on it, but with the A replaced with the sign of the Deathly Hallows from Harry Potter. Comments were made at the time - very subtle comments - from various family members. So as it's her birthday, Aunty B gets a pouch! 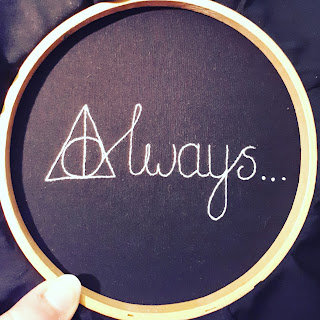 I then read some of the tips on this pouch - the instructions have you make enough binding for two pouches! So I picked out some fabrics for me that would go with the black binding I was going to use for Aunty B's. Yep black binding. This was a mistake - it's a pain in the arse to make and use black bias binding... 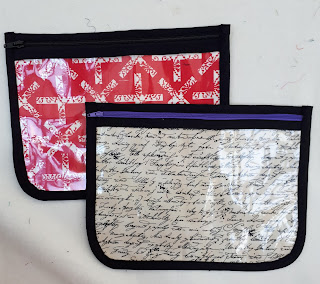 I cut all the pieces for two pouches, I embroidered the black one. I made the flipping bias binding (more alchemy - continuous bias binding.....had me flummoxed for a bit). And then I set about making the pouches. I did Aunty B's first and it went quite well. I had to trim away some of the seam allowance to get the binding to go round and cover the stitch line, but it was a neat and tidy finish (don't look at the puckers in the binding as it goes round the corners). 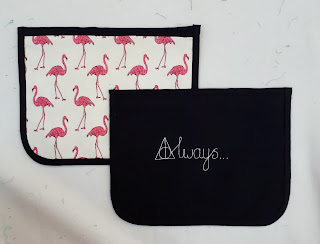 Then I made mine. The zip was a different make. Chunkier. So my zip wasn't attached as close as it should be, so when I came to attach the other side, I had to trim, which meant the stitch line on the back didn't fall right, so it looks scruffy. The bias binding fought back. So again, the back looks untidy... In reality these are minor things and I have a perfectly functional pouch but if I were to do it again, which I probably won't, I would definitely use the same fabric for the binding and the back or at least fabrics where the same thread would blend with both - I did with Aunty B's and it looks so much tidier. And the chunkier zip wouldn't have been an issue if I'd used my zipper foot, which I never use, because I don't actually know where it is... we live and learn! 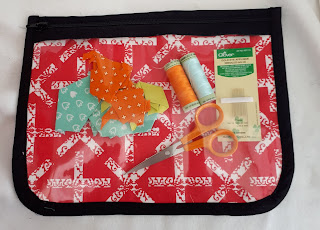 An "Always" zippy for Aunty Barbara was on my original Finish Along list, which you can find here, so that's another tick!

Having just used black bias binding on a zippy pouch I agree with you entirely! xx

I love these and may be copying the HP one! Congratulations on the FAL finish! *waves pompoms*

I love all these pouches! I need to get pouch motivation! On behalf of the FAL crew, thanks for participating!