It has been a while since I talked about the Ice Cream Soda quilt on my blog, so here's a bit of a recap This was the block of the month programme from Tales of Cloth back in 2017. I didn't keep up but I did keep going. Even though I didn't touch it for the majority of my pregnancy, towards the end, it became my project of choice. I powered through the last ten blocks and the half blocks and I actually enjoyed joining all the blocks together- something I had honestly not been looking forward to. 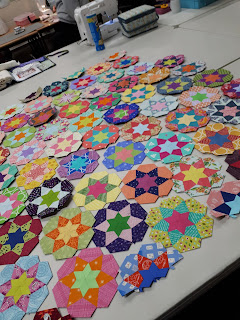 I think one of the reasons I really enjoyed this quilt, was because there was no plan, all fabrics were up for grabs and it was mindless sewing as the blocks were simple and quick to put together. (I am on the hunt for a new quilt pattern that ticks those boxes). 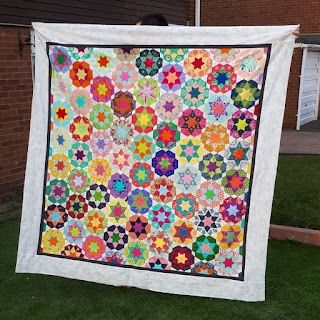 The borders are the only machine pieced part of this quilt. And they were objectionable. I don't recall the last time I had to use the seam ripper as much and I have no idea why it caused me so much bother. But I'm glad I did the extra work of adding two borders as the dark grey really frames the piecing. 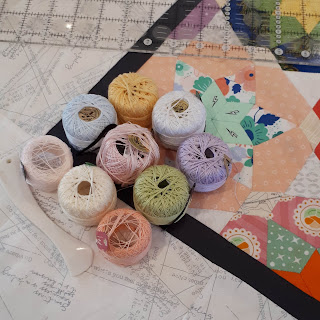 Brilliant! Scrappy and happy--I bet you smile each time you see it. Well done on persevering and enjoy the hand quilting--perlés are super for the extra texture and gleam.
Hazel (WP)