At the end of January I finished my Alison Glass rainbow triangles cushion. It was much admired, as I mentioned at the time. And it just so happens that both my mum and my mother-in-law have February birthdays, so I pulled out all my Alison Glass fabrics. It turns out I have quite a collection... I may have added a few as well. I started cutting triangles for two more cushions. 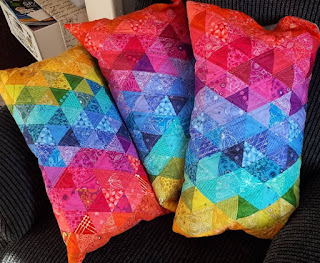 Rather than hand piece, this time the cushions are machine pieced. Machine quilted. Machine finished. As these cushions were rather unplanned, the backs are a bit of a scratch job. 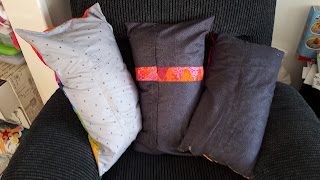 I used the grey Diatom print for my Mum's - it's lighter, and she likes light. For Linda's, I pulled out all the dark Stitch fabric I had left - in multiple pieces. It would appear it has come from two different sources as they are slightly different colours.... I decided to use the leftover triangles (all of which were pink and orange), to make a definitive break between the two fabrics and you can't tell they are different, and it's actually my favourite cushion back of the three - I wish I'd done the same on my own!

So that's two unplanned finished - they barely even appeared on the WIP list!
Posted by Jennie at 09:26