Just after Joshua was born, I was scrolling through Instagram and happened upon this year's Mini Dresden Party #minidresdenparty2019 and as Michael was holding the baby, and it looked pretty quick, I decided to make one up. An hour or so later I had a little Dresden, all appliqued to some background. I obviously had my normal Dresden issue... there are not the same number of blades in this as there were in the pattern... this always happens to me! 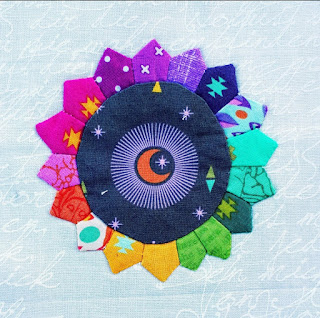 I used scraps from my Mandolin Quilt so they are mostly Spirit Animal by Tula Pink but with the odd added extra! Then I got distracted by other pretty things and Baby Joshua...Fast forward to writing my Quarter 2 Finish Along list. The Dresden was still lurking on my sewing table, waiting to be finished as... something. I added it to the list. And then last week, I was looking for a piece of fabric and stumbled across it. I thought it would be a quick finish as a pincushion. Just whack on a back and stitch up the opening. Easy. I cleared my desk of loose threads, random binding clips, and various pairs of scissors, cut the backing, sewed my seam and then had a brainwave... those random binding clips... what about adding some flappy bits for them. I was sure I'd seen something like that on Instagram. How hard could it be. Famous last words. I should have gone and looked for a pattern. But I didn't.

I unpicked the seam I had finished and I made some flaps and basted them in place. I decided they were too long and would get caught in the seam. Then I trimmed them down and re-finished them and rebasted them. I sewed it all up. Lovely. Sewing the gap closed was a bit of a mess as the flap was in the way. Put some pins in the pincushion and added a few clips for a quick photo shoot, only to find that the flaps were a bit... floppy. 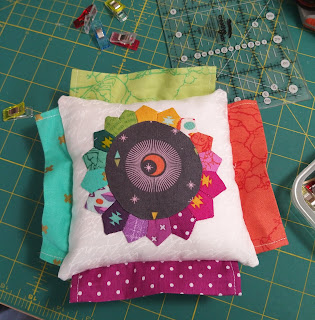 No way I was unpicking again. So I folded over the flap, and secured it in place with a row of hand-stitched running stitch in perle cotton. If anyone asks, it was a design decision I had planned from the start. I now have narrower, sturdier, less floppy, flaps. And a finished pincushion I'm a little bit in love with. 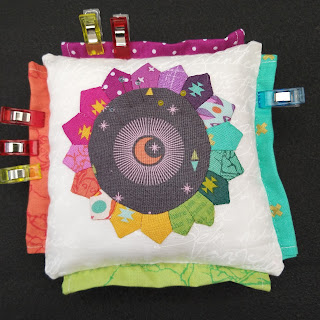 Note to self: there's no such thing as a quick finish; don't change your mind halfway through a project; plan! This is a finish along finish. You can find my original list here.

What a brilliant pincushion! Your story about making it up as you go along sounds very familiar :-)
But it worked out really well (if not very fast), and it is a finish to be proud of!
Thank you for joining in the Finish-A-Long, on behalf of all our hosts!