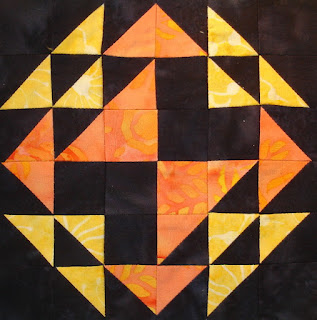 I may have avoided Corn and Beans (block 22) after there were a few comments posted on the Flickr Group about it being a bit of nasty one. Also, the foundation piecing pattern looked horrific. With my new-found piecing skills and ability to calculate HSTs I decided to have a go at a rotary cut version, and I broke it down into small blocks. It turned out pretty well.
I had originally picked out yellow and green, and then Linda said that it should be orange for baked beans. I still haven't got orange out of my system, so it didn't take much to convince me!
I've spent loads of time this weekend making Oh My Stars blocks:

I had 36 left to do when the post went up with the final contruction instructions. I cut all of the fabric (I'm quite tight on blue and green but have loads of pink left) and then pieced. And pieced. And pieced. Just six left to go! But I've had to clear the table so the guys can see the football on TV, so the last few will have to wait till later this week. Then I need to find an area of floor big enough to lay them all out, clear of helpful doggies and decide which goes where.

A satisfiying little stack of this weekend's 4" blocks!
I didn't manage to get any Granny blocks made this weekend, but I've cut loads of 2.5" squares and laid two out.
Today is the first day of the next quilt-along after Swoon on the newly named "Swooning on a Hop Along" Flickr group. I'm going for Hopscotch first, but triangles and bias edges and templates.... I'm going to make a practice block and see if I can use the lines on a ruler and rotary cut rather than use the templates. I really really don't like templates.
Posted by Jennie at 21:17

How Cute!! I love the color combo. I'm super excited to do that block this week. I hope it turns out as good. I just finished 10 blocks in the last 2 days and I'm so loving this quilt. I hope your having a fantastic day.

i was thinking of doing corn and beans a little later this week. i think you've convinced me :)

I am working on this one today and am just about to put the last pieces together. It was very challenging!