My chevrons have been chased

I have my first March finish: Last night, way after bed time, I finished the binding on my Chasing Chevrons quilt from That Girl That Quilt.
I tried to photo it outside on the washing line, but it was a bit windy:

Here it is on our single bed (it's nearly big enough):

And here some smaller shots of binding and backing.

The busy print on the flannel (Robert Kaufmann) hides a few rucks in the backing when I was quilting.

I couldn't decide over the quilting, but eventually decided to straight line echo quilt some of the seams, a (large) quarter inch on either side. As the chevrons are laid out in a random manner, I decided to quilt random seams as well.
I picked a flannel for the backing and didn't use wadding, which gives a lovely light quilt for the summer, to go with the summery fabrics. Then I bound it in the background fabric - I nearly had a problem here as I was a little short. I went back to my LQS where I had originally bought it and got the last fat quarter they had!
One quilt finished, another one ready to start. The Swoon-Along will start its next quilt on 12th March with a choice of On A Whim or Hopscotch. I'd like to do both, and I think On A Whim will make some good Christmas presents, but I'm going to start with Hopscotch, a jellyroll quilt. I was going to use one I already had, and then at my LQS they had jelly rolls of Half Moon Modern - this ticks the box for modern and bright. Sold. 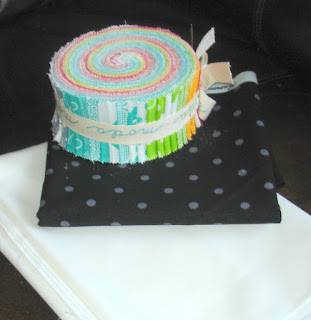 I've picked a white calico and a black with grey spot as the accompanying fabric. I just need to finish piecing my Swoon...
Posted by Jennie at 17:08

Hi Jennie, I followed the links from the small blog meet to this quilt, it's really lovely, great job. :-)