Progress has been made! Two finished flimsies! Wohoo!

Steph's quilt was stalled from word go. I just found it really boring - I much prefer fiddly, intricate sewing. But it was a good exercise, because it made me realise that! And int he future, I would pick different quilts to make when people ask for one/I offer to make one.
Just before I went out to Budapest again I trimmed all of the blocks - I did it with company to make it less boring and make me finish it! Then yesterday I sashed it. All in one go. Done. It went amazingly quickly. I thought about adding another couple of borders, but it is already huge, so I think I will just finish it off with a scrappy binding!
Speaking of borders, my Three Peaks quilt top was nearly finished. Yesterday I added the three borders I had planned, and this is another quilt top ready for basting and quilting. 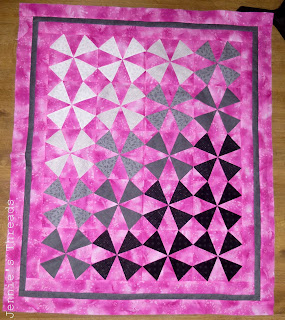 Even if you don't particularly like a quilt, it is so satisfying to complete it! Yay! on your finishes. Love the Three Peaks.

Well done on your finishes, I think you did really well especially to work on something you're not over keen on.