On 23rd December I had my final Christmas finish! The batik wall hanging for Mum nearly beat me....

This project came out of a conversation in September 2011. I had started playing with bias applique - a Celtic Knot block, and was playing with batiks for my Farmer's Wife quilt and Mum put the two together... "wouldn't it be nice if....."

I made a start in early 2012 and it was a total disaster. I tried using calico as a base and then used fabric glue to roughly attach the batiks to the calico then started stitching on the home made bias tape. Well, everything moved. I didn't get very far. It got shoved to the bottom of the drawer and I ignored it for a bit.

In October 2012 I was reminded of it again. Pulled it out. Decided what I had done could not be saved. Started again. This time I pieced the batiks in the traditional way, cutting accurately, quarter-inch seam... etc. and ended up with this.

Then I made up some bias tape and started adding it to every seam.... 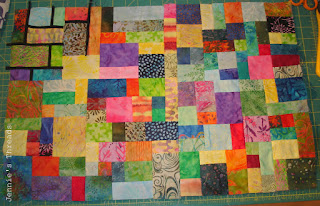 ...I got sick pretty quickly and it got put back in a drawer.

Fast forward to Summer 2013 and I saw some pre-made bias tape in a patchwork shop. I knew it existed before hand, but this time the shop had black in stock, rather than having to order online. I bought ten metres. And then continued to ignore the project until about 3 months ago. I did a bit more. Then other hand stitching projects took priority. A week before Christmas I decided to finish it. I have these stupid thoughts occassionally. 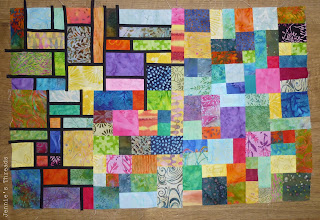 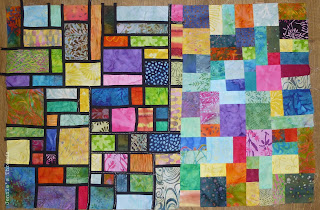 I crossed my fingers as I got close to the end of the pre-made tape, praying I wouldn't have to get out the mini iron and tape maker. I was 24" spare in the end! Given that the first part of the wall hanging was made with home made bias tape, I reckon this has used about 10m of tape, hand-stitched on both sides, along every single seam line. All of the raw ends are tucked under another length of tape or finished with the final binding. 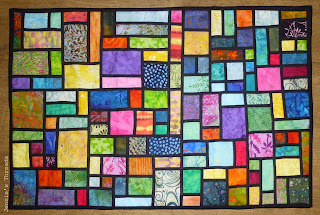 Of course, applique causes crinkling, so the stitching was followed with some tender loving pressing, and then I layered it up and bound it. I love the batik on the back - you need a larger area to really show the colours and pattern and this was perfect. 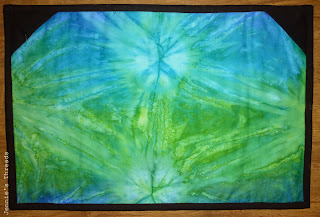 I had planned to hand quilt round random sections, but when I started it looked awful. I liked the flatness of the unquilted wall-hanging so eventually decided not to quilt it at all. The finished wall hanging is 15" x 23" and it will never be washed or handled very much, so I risked it.

It was wrapped up under the tree ready for Mum on Christmas day and she loved it. This was a bit of a labour of love, and if it hadn't been for Mum this may not have ever been finished. I'm glad it is.

Next week I will be linking up with the final Quarter Finish Along for this project. And I really hope to have a couple of other finishes to share between now and then. Mum and Dad have just left after Christmas, and we have no other plans for next week or so - other than a scan tomorrow afternoon, so there are two more projects I would like to see finished this year (or maybe in the first week of next year). Because obviously I have a few new projects lined up to start.

I have projects left to finish for next year too - so I'm already thinking about my list for the first Quarter with Katy.

A lovely present, I bet it will look beautiful on her wall. Enjoy your week of sewing, you are doing so well in the FAL.

What a gorgeous wall hanging for your mom...I am sure she will love looking at it hanging on her wall...I know I would! Just awesome!

As painfully labourious as it might have been, the black bias tape really makes the piece, it adds definition and depth. Great finish.