Yesterday was Friday Night Sew In. I could have chosen any of the current WIPs (of which there are many) but....
...I have a few projects sitting in the relegation zone at the moment - they are currently on my WIP list but if I ignore them for much longer they may have to be relegated to the UFO list. The Yellow Tablecloth was one such project. It's not that I don't like it - I love working with these colours and it's for a very special person - my Mum.
I have mentioned the Yellow Table Cloth on my blog before, but I don't think I told you the background:

In August 2010 we went on our normal summer holiday to Sidmouth in Devon for the folk music festival. You can't have a summer holiday in Britain without at least one rainy day (if you only have one then you are very lucky). At Sidmouth 2010 the Wednesday was the rainy day. Mum and I were half way down the high street when the heavens opened, so we dashed into the nearest shop, a news agents. I have never seen such a fantastic range of patchwork magazines. I was flicking through an issue of Quilt Mania (I think it's a French magazine) and Mum was looking over my shoulder and saw this design. A few minutes later I had agreed to make it for her.
The dining room at Mum and Dad's house is very dark, so a nice bright tablecloth (to replace the one they've used as long as I have been alive) would really lift the room. We set about buying the fabrics. Mum first wanted lemons, but we ended up moving towards reds and browns, with cream "slivers". 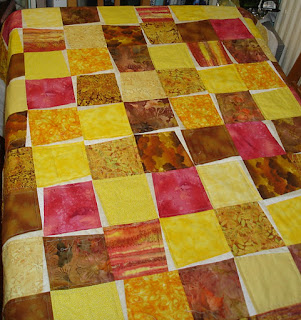 It took me a while to get started, but I finished piecing the top last spring, and we bought the wadding and backing. I even had a go at quilting it. But my old machine was having none of it. I had quilted two squares very badly, it went into the cupboard and was abandoned.
Now I have my new machine I couldn't open the cupboard door without it waving at me. So I used the excuse of yesterday's Friday Night Sew In to get it out and attack it head on. It only took me half an hour to remove the first quilting attempt and the basting and the safety pins - I thought this would take much longer. I relayered it with some assistance and quilted half of it last night. I had planned to quilt it in the ditch, but there are the odd seams that don't match quite so perfectly, and I realised that quilting in the ditch could result in accentuating these inaccuracies. Instead I am quilting approx 3/8" in from each seam round the inside of the colours. There is no quilting on the slivers. Now I wonder why I ignored it for so long.

Although not a great photo, this was the best I could get to show the quilting.

I need to finish the quilting (probably only another evening, but not this evening), then we are putting curtain weights on each corner so that it hangs nicely, and then the binding with the beautiful red/yellow batik stripey fabric that you can perhaps pick out in the photos.
Mum has a significant birthday in February and the party to go with at the end of March. This quilt will be ready to go down with me by then!
I hope everyone else had a productive Friday Night Sew In. I'll be popping in to see what everyone else got up to later this evening.
P.S. Look at these fabrics I bought today - I have a (-nother) project in mind for these - not sure I'll be able to resist for long

I love the color mix on your tablecloth. A great FNSI project!

What a fantastic project for your FNSI

Yay for making progress on "old" projects. It always feels good when you make progress after a long time of it collecting dust. Your mom is going to love it!

What a cheery tablecloth and i love the new fabrics you have picked out for the next project.

That will make such a happy table cloth. Your mom is sure to LOVE it! Great FNSI results. I love your Swoon block from the last post, too! Love the colors. :)
xo