I haven't shown my Farmer's Wife blocks much attention recently. I was getting itchy fingers. So I've made a few this last week. Eight to be exact. Plus one I made at the beginning of May. 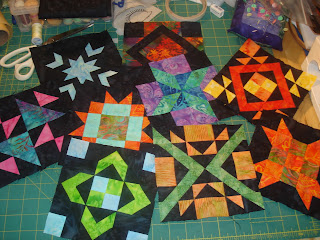 #27 Darting Birds: a few months back, someone in the Flickr group happened to mention that this block looked like four little robots. Well, after that it was all I could think of, so I kept skipping it. In the end I rotated four of the quarters so that all of the little robot heads were in the middle, and it looked like a star instead of robots. 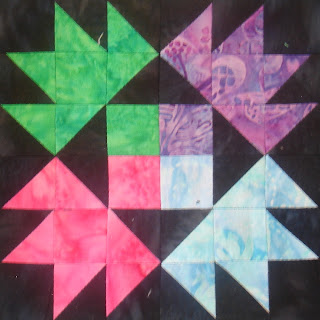 #32 Farmer's Daughter. This was a bit of a challenge... it's a five by five grid on a 6x6" block, so rotary cutting was a bit of an issue. But I think I beat it - I rotary cut the pieces to make a block that would come out 6.25"x6.25", then shifted my needle position to take a bit of an extra of each seam allowance. It worked - my finished block is 6x6"! 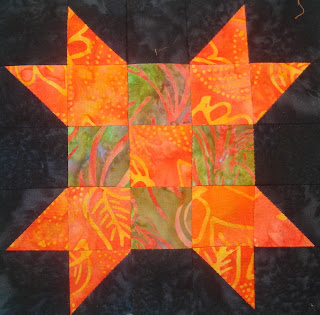 #33 Farmer's Puzzle: this has a bit of the Swastika to it. So I didn't make it. Instead I replaced it with a block called Clay's Choice which came from  100 Traditional and Contemporary Quilt Blocks (which belongs to my Mother-in-law - don't tell her I still have it). The fabrics don't give much contrast, but I love the colours. 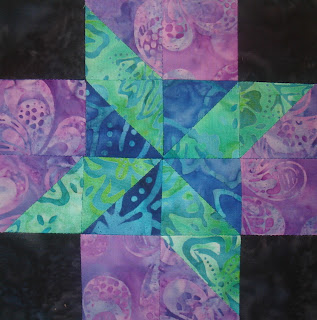 #88 Star of Hope. I replaced this one with a block called Garden Trail. Although I have nothing in particular against Star of Hope, it would have resulted in a lot of black, so I picked a block from the Jelly Roll Sampler Quilt book from Pam and Nicky Lintott. 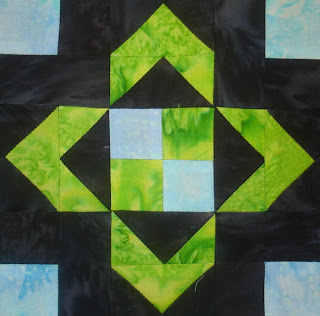 #43 Garden Path: I might have been avoiding this one. But now it's done I really like it. 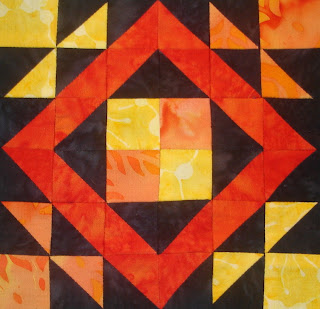 #37 Flower Pot: I don't like the blocks with vases/baskets, so I swapped this for a block called Fox and Geese, also from the Jelly Roll Sampler Quilts book. I think this block design may be one of my favourites at the moment. 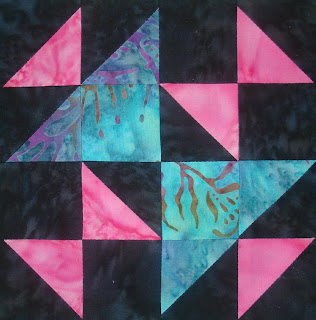 #40 Friendship Block: I've been rotary cutting my blocks recently, but this one really didn't lend itself, so I foundation pieced it. 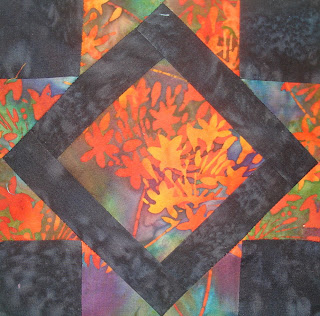 # 42: Fruit Basket: I don't like  baskets, so out came the Jelly Roll Sampler quilts again and I picked Maple Star. 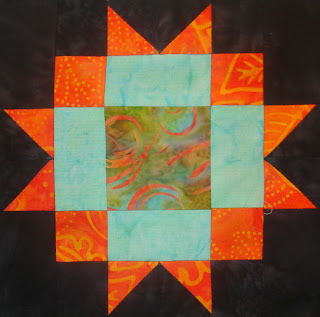 And finally, this evening's contribution: #82 Spider Legs. This block was a bugger. I really like it, but I will never make it again. I found it impossible to get my points to match and because I was foundation piecing reverse stitching was hard work. It's not perfect, but it's done, and hopefully in the final quilt it won't stick out. If it does, I'll find a different block! 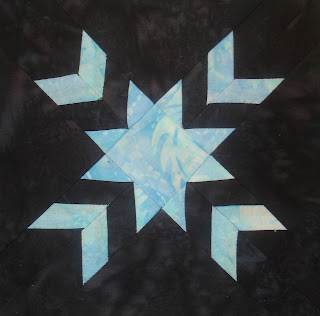 This brings me to a total of 91 blocks. I can't believe I only have twenty left to do. And whilst I'm on a roll I shall keep going. I made my first Farmer's Wife block in July last year and I would really like to have the quilt top finished within a year. Wish me luck!
Posted by Jennie at 22:58

Wow so many blocks! They all look very creative. Looks like they're a challenge to make. Remember to throw yourself an mini celebration once you're done =D

Good luck! You can do it!

Wow, these are stunning!

Wow you have been super busy! They all look great