It's been a while since I wrote a blog post with that in the title, hasn't it! I started my Dear Jane adventure back in 2013, made 39 blocks. And then I moved on to other things. I think part of the reason, was that I had decided to hand-quilt it using a quilt-as-you-go method, and I hadn't got on with the quilting. It has all sat in a project box in the cupboard ever since. I actually found it the other day! 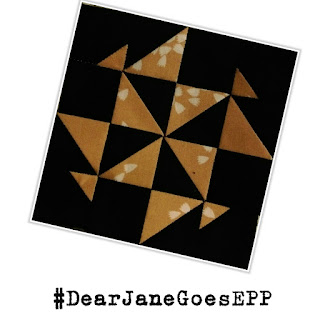 At the end of last year I saw that Paper Pieces 2017 block of the month was going to be a paper-pieced Dear Jane. I got very excited. And even more excited when Simply Solids chose to offer it. I got my first delivery of paper pieces in January and decided that I didn't like it with a light background any more. I wanted a black background. So that's 39 orphan blocks, 9 of which have some fairly dreadful quilting on them! 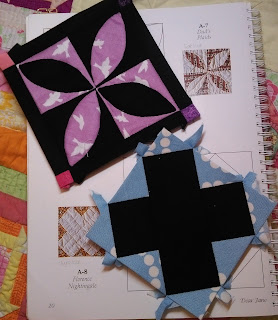 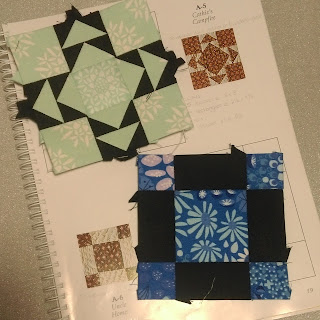 Let me say at this point, that some of the pieces are TINY. And the first task is to take the bag marked A1-A6 and work out which piece is for which block. My husband thought I was mad! 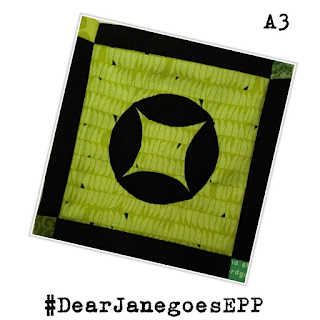 And then I started sewing. I am glue basting again, and there are a lot of pieces where the seam allowance is far bigger than the piece itself! The basting is going very smoothly, except on the sashing strips, where things like to move and unglue! 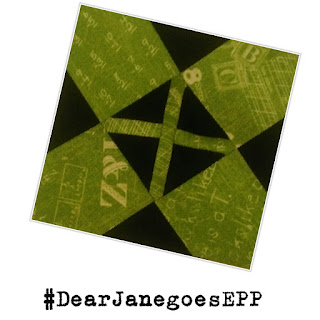 It took me longer than a month to get all 13 blocks stitched up and sashed, so chances are I'll fall behind. But I don't want to skip the sashing step otherwise I'll never finish the quilt if I have to do all of this at the end! I'm also making a conscious effort to remove the papers once a block is fully sashed - another step that could be hell if I leave it to the end! 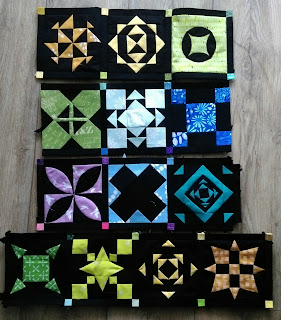 I'm planning on a rainbow Dear Jane with the print fabrics used only in one block. To keep me on the straight and narrow I'm creating a little chart with a 12 piece of each fabric in it's position. At the end of the project I'll add black satin stitch on all the joins and have a nice little mini Dear Jane! 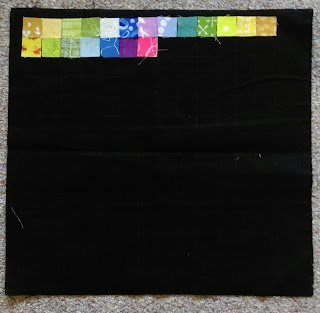 Month two is sorted and the fabrics have been picked - you can have a sneak peak at my fabric choices in the photo above. I can't promise a monthly update here, but eventually I WILL have a finished Dear Jane eventually.