And we all Swooned happily ever after....

as promised, here is my finished Swoon quilt in my parents garden (Dad on the right is shorter than my hubby on the left!): 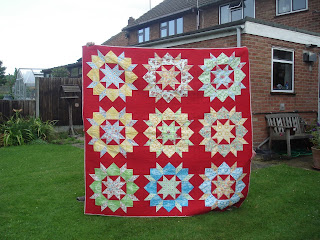 Early in January I was reading Camille's blog and saw the link through to the Swoon Along on Flickr. I read the posts, and the fabric requirements - 18 fat quarters, then took the dogs for a walk and tried to justify starting another new project. About half way through the walk inspiration struck - the 18 fat quarters of Happy Mochi Yum Yum I had got for Christmas from Linda. It was fate. Justified! I joined when there were about 130 members. There's now over 1000 members! 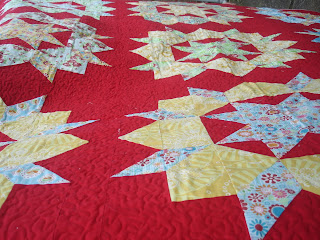 I had eighteen fat quarters of Happy Mochi Yum Yum by Monica Solario Snow in blues, greens, yellows and whites. I needed a background fabric and fortuitously had also got some fabric vouchers for Christmas... I went to my LQS looking for a navy background fabric. Until we pulled the red fabric.... sold! It's a solid red from Aunt Grace. 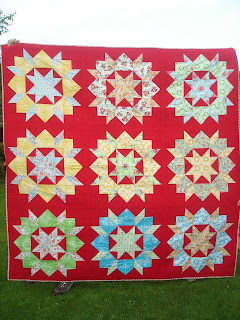 There were some great tips on the Flickr about cutting slightly bigger and trimming down, and on pressing the seams open. This was the first quilt I made where I was happy with every single seam, and it was down to the advice from the other wonderful people quilting along!

I had decided very early in the process that I wanted red and white striped binding. I then needed backing fabric. Finances were tight so (again lots of tips on Flickr) I looked for a good quality sheet. We have an outlet store near where we live, and I managed to pick up a very good quality sheet for £13 rather than £56 - it's a slight second, and has a small mark on it- what better way to make me do a quilt label! I had hoped to get a colour other than white, but there wasn't really an option, so white it is. I layered it up with bamboo blend wadding.

I finished piecing the quilt top in March, and then waited for my sewing machine to be fixed (it was refusing to free motion quilt). Once fixed I practiced on my Ambrosia quilt. It was amazing the difference from broken machine to mended machine. I had thought it was me not being very good. Once I had practiced on Ambrosia, I went for it on the Swoon quilt with a tight stipple in all of the background fabric so that the stars in the pattern really popped! I was so pleased with how it turned out. I used red Aurifil both top and bottom, so you can see the stitching and the negative space where the stars are on the front really clearly on the back. 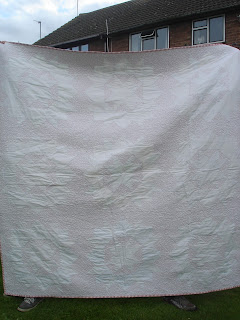 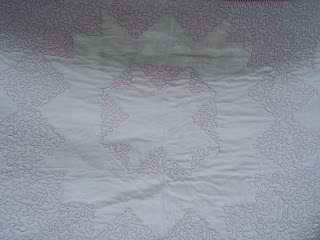 This was the biggest quilt I've completed so far (until Oh My Stars which I completed a week later!). Come the end of September I will be linking this finish up to the Third Quarter Finish Along hosted by Quilter in the Gap.

P.S. The Swoon Along became the Swooning on a Hop Along and is now a group for any of Camille's patterns - I've started Hopscotch, but not much progress to report so far!

Haha what a funny picture of the quilt hold up. You could have gotten your father a stool =P

It's a great quilt pattern and loving the quilting pattern! =D

Beautiful red colour. I use a lot of sheet material. They have lovely patterns.

That red background was inspiration! Another great finish. Whoop whoop!

The red background on this is fabulous. This quilt is on my to-do list. I really need to get going on it!

Thanks for the inspiration. Mine is waiting to be quilted. Maybe the stipple is the way to go. That's where I have been hung up, how to quilt it.

It's so beatiful! Congratulations!

WOW! Did you quilt this on your home machine?!? I am going to do 4x4 blocks for my swoon and I know I will never fit something that large into my sewing machine. This quilt is just so amazing - the red make such a bold statement!