Back when it was first announced, I decided to take part in the Super Mario Bros QAL over at Cut to Pieces. Then gradually I changed my mind.... there were a couple of reasons: Michael had originally said he would like it as a "hangover quilt". He changed he mind - possibly because he hasn't had a hangover in a while (watch this space tomorrow morning!); the technique for getting perfect seams used a wash-away interfacing which was hard to get in the UK and expensive; and my stash of solids is non-existent, which meant the cost of the fabric would have been high, even if I had gone with Kona equivalents over the suggested fabrics. Then I inherited the fabric from Granny, and there were solids. I needed to add in only the flesh colour and the brown.

And I had a brainwave that I could make a couple of cushions for some cousins - one of Mario and one of Luigi - as Christmas presents. But you now me - I like small. And as if 1 1/2" cut squares wasn't small enough, I decided to cut 1" squares. Just as well, as I'm cutting it very close on the light blue fabric! I pieced it traditionally without the interfacing and although not every square is actually square, most of my seams match just fine.
So here is Mario 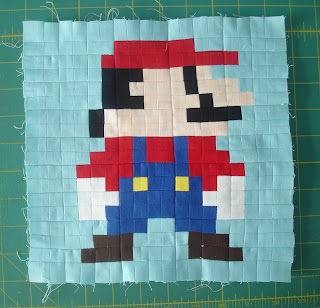 He measures in at 9" x 9" and contains 324 individual squares cut at 1" and finished at 1/2". You can only tell that I stitched him together wrong if you compare him directly to the other Marios in the Flickr group - my Mario has a slightly thicker neck and less of an ear.... I'll try harder with Luigi! (I can't face unpicking about a million seams to put him right)

One thing I know for certain - I would not be making a whole quilt of these! Mario alone took me over 5 hours!

Mod Pop is a new fat-quarter-friendly QAL organised by Leanne at She Can Quilt - she pattern tested a design from Distant Pickles and is now doing it again and inviting anyone who will along for the ride! Check out her version here - isn't the quilting fantastic, and the original here. Yes - you may have noticed - curved piecing! I've been looking for a reason to practice this technique for a while - I've done enough that I'm not scared any more, but I definitely need more practice. I'm making a lap quilt as a Christmas present and I'm using some fabrics I collected a couple of years ago for another quilt that I've since decided I won't be making: browns and blues. 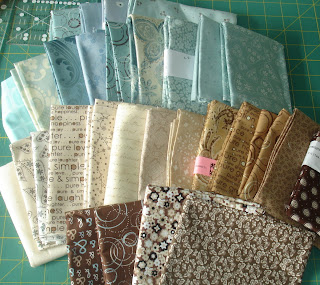 I have more fabric than I need, but that means I'll have some of each of these beautiful prints left to hoard in my stash!
Posted by Jennie at 13:06

I love the tiny Mario! Although it is time consuming, I do love tiny piecing. Your Mod Pop is going to be lovely in those colours and fabrics.

Mario looks great! I couldn't do this tiny squares. They'll drive me mad.
I love the brown and blues you've got. Will look very nice together.

Wow 5 hours what were you thinking!!
I love your beige and brown fabrics, those are just the shades my stash is lacking. =D

Looks good. And five hours for a single block? That's fast :)
Good on you for not using interfacing. Iadmit I did wonder why everyone seemed to be using it

love the blues and browns!