Since the last festival I have finished loads of quilts which I could enter, but I'm sure anyone who follows my blog will have guessed which quilt I'm entering.....and will probably be fed up of seeing it by now :)

The Farmer's Wife Quilt - here's the story and lots of photos! 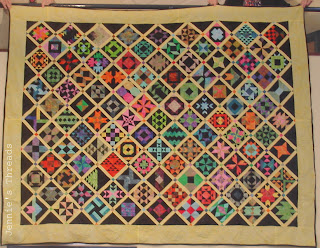 In June 2011 some of my favourite bloggers joined the Farmer's Wife QAL on Flickr and I got sucked in! I had just learnt how to foundation piece, so I also joined the Yahoo group and "borrowed" my parents printer to print off all of the foundation patterns. I hate templates, and there were some blocks that would have been impossible to rotary cut - including some of my favourites!

I had been looking for an excuse to buy use batik fabrics. I just had to decide on black. Or white. I change my mind about 7 times before settling on black. (Maybe I'll do it again, but with white).

In January I also joined the Swoon QAL (I finished this in July and this was another candidate to enter). Although I liked the 24" block size, I prefer small and fiddly. I was planning to ask someone in the QAL who had already shrunk the block how they had done it, when it dawned on me! It suddenly clicked, along with the maths for cutting and sewing HST. The Farmer moved quicker after I learnt this skill, as anything I could rotary cut, I did. I think overall maybe two-thirds of the blocks are foundation pieced and the rest rotary cut.

I don't like basket blocks. So I swapped out about 11 blocks and replaced them with others that I had come across, including a 6" version of Swoon.

I finished piecing the last block in May and then started the sashing. I nearly gave up. I drove me mad. I did a small version of 36 blocks as a baby quilt for some good friends. It re-inspired me - and made me feel a little guilty because I was ignoring the full size one.

I picked up a gorgeous extra wide batik at a quilt show - perfect for the backing, bought some black wadding and my mum was volunteered to help me baste it on her living room floor.

I got an early Christmas present - a walking foot and spent a week quilting it. I finished it just two weeks ago. 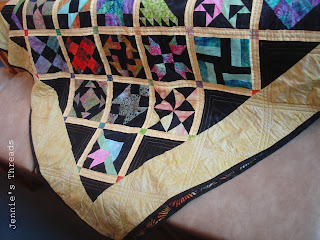 Wednesday night I washed it. I hadn't pre-washed any of the fabric, so it could have gone really, really badly wrong. Eight colour catchers in the machine with it. It came out fine! *relief* 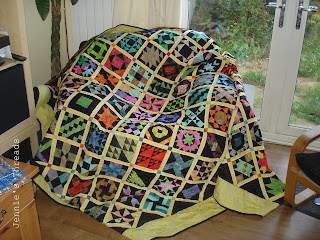 And the final step: it's now on the bed in the spare room waiting for my mum to arrive tomorrow to spend the week! I can't wait for her to see it. 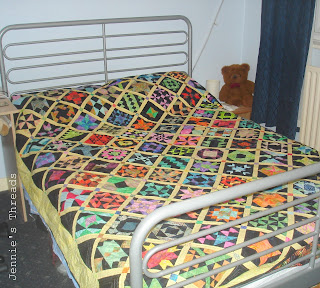 I learnt so much with this quilt: to not be influenced by the colours of the quilt on the front cover, drafting blocks, putting together colours, that I am absolutely addicted to QALs.... through this QAL I also came across some fantastic blogs, other quilt alongs, swaps and bees - such a fantastic online community!

The finished quilt is 80x100". I used a mixture of foundation piecing and rotary cutting. I quilted it myself on my Husqvarna using straight lines.

If you've popped over from the Festival, thanks so much for stopping by - I'd love to see you again sometime.

Stunning!!! You did an outstanding job!

I love this quilt more every time I see it. That and it makes me want to pick up my blocks again.

Since I can't (still waiting for my friend to carch up), I'm plotting Dear Jane. Have chosen a theme and have arranged to get some small cuts to audition fabric. Planning on starting Feb 1st. Will you be ready to start yours by then? :)

This is one of the most beautiful FW quilts I have seen. Well done. I am definitely voting on this one.

My Farmer's Wife was my choice to enter the Festival, but I still am deciding how to quilt it. Yours is nice and bright. I worked on mine with a group of ladies and used Marti Michell's Templates. I like how taking a picture in the sunlight makes your quilt look like stained glass.

Looks great! And I'm so impressed you have a finished farmer's wife, seems like most out there stalled at some point. Way to go, that's a lot of blocks to make.

Your Farmer`s Wife is is beautiful. It is a great eye-catcher forBlogger`s Quiltfestival.
Liebe Grüße Grit

Wow. What an undertaking! The sunlight photo is terrific (as is the whole quilt). Beautiful work!

I love the Farmer's Wife Quilt! Such a great collection of blocks, and every one is different. Your colors are gorgeous! You should be so proud of yourself!

Wow!! It's fabulous!! I've seen lots of blocks being made as part of the QAL but yours is the first i've seen finished. I'm so impressed by the amount of work that has gone into the Farmers Wives quilts. The mini swoon is so cute!

Congrats on that finish, it represents a lot of work!!

Gorgeous! It is no wonder that you are proud of this one. :) QALs are such a wonderful way to work on a project-- so motivating and encouraging. Good for you for sticking with it-- the results are truly awesome. :)

You really did a wonderful job on your farmers wife. I should be very proud!

This is amazing! I have the Farmer's Wife book and hope to make my way through the blocks next year. Very inspiring!

WOW, what an accomplishment! It turned out beautifully!

Absolutely not tired of seeing this one! It is stunning, really! I bet it would look awesome in white/ivory too
:D or perhaps you'll be on to anpther qal by then? Love it!

Your color choices make this look so different - great job!!!

I really loved reading about this!! It was those Farmer's Wife QAL posts in June/July 2011 which eventually led to the creation of my entry in the Blogger's quilt festival. My mom and I did a similar quilt from the Civil War Love Letter book. It was really wonderful seeing another finished sampler in this style! I know you understand how frustrating it is to get some of those tiny pieces just right!

I have 18 ladies and myself all working on the Farmer's wife using Marti Michell's Perfect Patchwork templates. We pieced all but 10 blocks and those we paper pieced. I would be glad to share them with you if you would like for your second one. I love the way yours turned out, I agree another color on the edge wold have been better for the setting triangles.

Gorgeous! I love the black choice in the backgrounds, and the sashing color as well. Such a modern look. Nice job!

I am in awe of the amount of work involved in this quilt. Beautiful work. It looks stunning.

Amazing! Stunning, stunning stunning! I just bought the book and have my fabrics ready to go...you have inspired me to start sooner than later! GORGEOUS!!!

Wow -- great job. a very striking quilt. Thanks for sharing. Glad the washing was successful -- always sketchy with not prewashed batiks. How much color was on the 8 color catchers?