To English paper piecing. Or so it seems! I thought today I'd do a round up of the numerous projects I have underway... starting with my newest project! This is the first round of the first rosette of the New Hexagon Millefiori quilt.

It took me a while to twig on what this quilt was. It's based on the book The New Hexagon by Katja Marek and you have to have the book to make the quilt, but the quilt itself isn't in the book... the book contains the building blocks and each month Katja is releasing another rosette which combines those building blocks. The first rosette has 37 individual hexagon blocks in it and each of the hexagons is a pieced block - each of these is a 3" finished hexagon which means this is chunkier piecing that La Passacaglia. You can find more info on Katja's site - I dare you not to join in. I've decided to make mine using the low volumes and neutrals in my stash which some splashes of colour thrown in - this makes it very different from my version of La Passacaglia

Which of course I started last week. This is definitely smaller scale piecing than the New Hexagon Millefiori. I'm picking out a fabric with a few different colours in (quite a rare phenomenon in my stash) and then coordinating blenders around that print. My first rosette (a number 8 rosette for those who understand these things) is now finished. I decided to leave it as quite a small rosette because although I like the fabrics, I don't love them. But the next rosette is part basted and I'm in love with the colour scheme!

Those are the two big, new EPP projects, but there are a few others knocking about too, such as the trapies I started at Christmas. I have no idea where I'm going with this, but three blocks are pieced and four more are cut...

There are some citrus hexagons. I made flowers up from these fabrics nearly three years ago, and then didn't use them all as I'd planned. I got fed up of moving them round my sewing area so stitched them together. Wouldn't this look great and scrappy as a full quilt. I'm using 3/4" hexagons so let's not hold out breath - but this is a nice easy project for when I don't have space to lay out the pieces as I'm stitching together all the same shape in a random manner.

I'm taking part in a Hand Pieced mini quilt swap on Instagram and today I basted the first few pieces. I'm making rosette 1 from the New Hexagon Millefiori but based on 2" hexies rather than 3" hexies... here's my initial layout but I may swap the grey and yellow.

Of course I'm making a Patchwork of the Crosses quilt too. And although I've only cut pieces to make a fairly small quilt I've started thinking about making this bigger too because I'm really enjoying it. I've obviously had this thought before because when I was unpacking at the weekend I found a bulk pack of the honeycomb paper pieces... 1200... should keep me going!

And finally I have a project I started when I was travelling to Budapest in early 2013 - it's the ferris wheel pattern combining hexies, squares and equilateral triangles, and made from Mama Said Sew fabric from Sweetwater. I have to confess I haven't touched this in a while and I don't quite know what it will grow up to become at the moment - it honestly took me a while to find a photo of it. Poor unloved UFO. 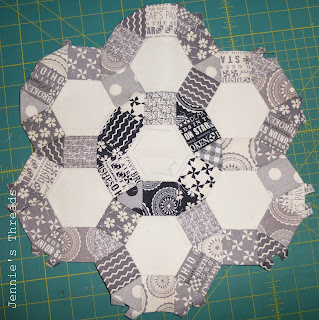 Does anyone else have an addiction like this?
Linking up with WIP Wednesday and Hibiscus Stitches
Posted by Jennie at 21:49

These are really pretty - you have a lot of patience!

Wow . . . you are addicted to EPP. I haven't tried it yet but just bought Katja's hexie book last week so maybe soon.

It definitely looks like you're addicted to EPP. Your projects are lovely.

Love all your projects. I have everything ready for La Passacaglia but I love the first one you have up so that might be another one I get to. Think I might be addicted too.

I especially like the black and white block with the red centre. I'm planning to try out some different techniques and patterns and then use my 'experiments' to make table runners. Your beautiful piecing would add interest to any table!

hi Jennie & thank you so much for linking to Piece Yourself Together!

It most definitely looks like you're an EPP fan with all those beautiful projects on the go... & those fabrics are YUM!
Enjoy & I hope to see you for the next linky too!