A week ago I was scrolling through Instagram on my lunch break and came across as shout out for volunteer angels for the #cottonandsteelminiquiltswap for the UK.

My head said: you already have a swap quilt to finish by the start of August which you've barely started and have no drive to even get out; your Cotton & Steel stash isn't extensive; you have a 17 month old daughter and plenty of commitments; you are supposed to be decorating this weekend because new carpet is coming on Monday...

My heart said: that stinks for the recipient, and when you were on the non-receiving end of a swap it was horrible. You should just volunteer and get on with it.

And this time the heart won. My journey from work to home is 20 minutes and because my new partner had given such excellent information in her sign-up form, by the time I got home I had a plan. I also had half an hour before I needed to pick my daughter up, so cut the fabric. Thursday night was our North East Modern Quilt Guild virtual sew along night, and by bedtime I had a finished quilt top. It was so refreshing to just sit and sew something beginning to end like that.

I also lucked out in terms of fabric. When the swap started my C&S stash was mostly limited to the basics with the odd designer FQ. I had intended to buy some fabrics which my partner liked, but she hadn't been very specific so I had just used what I had. The parcel I received was incredibly generous and included a fat quarter bundle of C&S fabric, and I had also been tempted with a couple of Instagram destashes... so out of my new partner's four favourite fabrics I actually had two of them in my stash - the black and white cats and the Japanese navy print. And she said "don't be scared of black and white" and I had some more of the black and white collection. It couldn't have been more perfect! I also found that I didn't have quite enough of the Black and white basics fabric, so had to include the solid black - I'm so glad I did, because this quilt would have truly hurt the eyes otherwise! 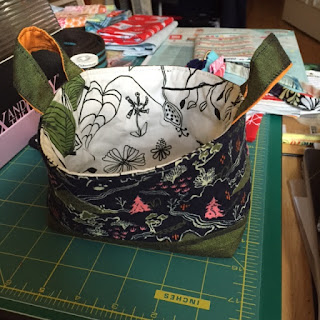 On the Friday I basted and quilted it. I also made a little patchwork basket to go with it using this pattern, and rummaged in my scrap boxes to put together a scrap bundle. On Saturday I bound the quilt and on Sunday I posted it. Robin received the parcel on Tuesday! Less than a week start to finish - a happy recipient and a reinvigorated sender. Because it was exactly the kick I needed to get on with my other swap commitment!
Posted by Jennie at 17:54

Good for you!! It really is wonderful to do something amazing for someone else. I am sure your extra partner was thrilled with her special quilt. x