If you've read a few blog posts here you may have realised that I'm not the only quilter in the family. My mother-in-law, Linda, who hates the term "mother-in-law" (it could be worse), is also a quilter. Actually she's mostly a piecer, rather than a quilter, so once she's made the quilt top it gets handed over to me. We tend to baste it together, then I get to quilt it. 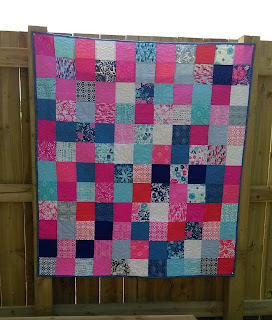 Her latest finish was a quilt made from Kate Spain's Paradiso line. She bought a layer cake, which we've split into four charm packs - 2 for her and 2 for me. She supplemented with some coordinating Kona's and made this lap quilt. 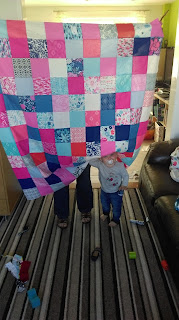 It will be a 90th birthday present for the mother of a family friend - I think Linda's quite worried that it's too modern for a 90-year-old. At least she'll be able to see it!

We layered it up with some plain white fabric on the back and then I'm told to "quilt whatever" - free rein to do what I like. But I struggled to decide on a pattern for this. It was calling out for an all over design, but the only all-over I'm really any good at is stipple and that's boring. I was eventually inspired by this post over at The Inbox Jaunt, and quilted 5 daisy motifs in borders, intending to densely quilt the background. In the end I only quilted the daily and left the box empty, then stippled round the the rest of the quilt. 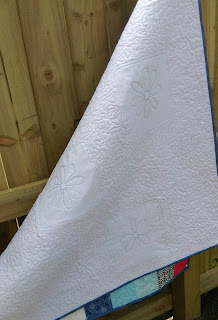 I marked out the daisies with a Frixion pen on the back of the quilt and quilted them from the back of the quilt so I could see the lines and they weren't lost on the patterns on the front. I did the stippling from the front. I had a bit of a disaster moment towards the end of quilting - I knew I was cutting it fine on the thread, and I lost the game of Russian roulette. I had a section about 12" x 24" left when the top thread ran out - I'd been using an Aurifil variegated pink thread, and had to substitute it for Gutermann in pale pink. Luckily the heavy pattern means I've got away with it. The bobbin thread lasted longer.... just a 10" x 6" section left.... more pale pink thread. I think you'd have to be looking for it to notice. I hope. 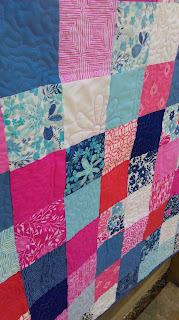 I also bound the quilt - with some more Paradiso yardage.

There is a queue of three more quilt tops I need to work on - they go back as far as Christmas so these will be appearing on my next Finish Along list.
Posted by Jennie at 19:54

Nice quilt your mother-in-law made. Love the daisies!

A lovely finish - both of you! And you are worrying that a 90 year old will notice the thread change!! xx