One of the best things about the #365 challenge has been the community that has grown up on Facebook. It's a UK based group - with some overseas friends too, and I've never experienced anything like it. Everyone seems to have really got to know everyone. There has been cheerleading when people have fallen behind; mutual moaning when a block had eleventy-billion tiny half square triangles; and shared success as members have completed their quilt tops.

To celebrate these friendships we had a little swap - 3" blocks, quilted and bound, whizzed around the globe! I signed up for three blocks - so I sent three and received three. The idea was that the blocks you sent should represent the quilt you made/were making.

Here are the three I recieved from Kirsty, Jackie and Fiona: 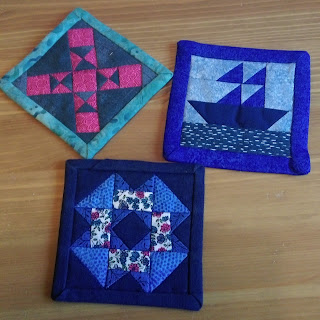 It took me a while to find the block I wanted to use. I needed one I could use as a colour wheel to reflect my entire quilt. Eventually I found the block for 7th September called 4 Corners. 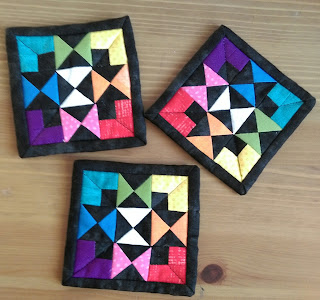 A little bit of 4am stitching (thanks, Jess) and I got them finished and in the post before the deadline!

But that wasn't everything. Because when you make the quarter square triangle blocks, it makes 2 at once, so I made a fourth block. Which I turned into a pincushion. 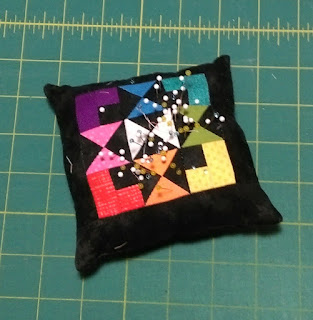 Then I suggested a private swap with a member of the group who had been disappointed not to receive one of the three originals.But I made two blocks. This quilt has been tightly woven around my youngest daughter: I started the quilt as I entered my third trimester. I finished the centre section just a week or so before she was born, and I caught up and competed the rest of the blocks as she napped and played. So that final block has been made into a hoop for her bedroom wall. Because there is no way I'm giving this quilt to either of my daughters. 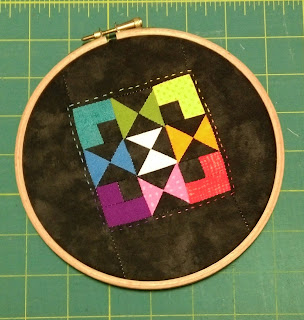 And then I swapped a few more. Five more. Which leaves me another left over blocks, so Mia can have one in a hoop too. But at the moment it's just a block.
Posted by Jennie at 19:00

What a gorgeous little block Jennie. Well, the ones you received are lovely but yours are stunners!