Another week - the year is flying by! 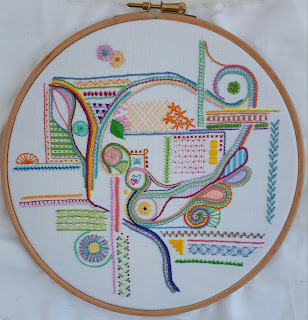 Monday, 24th April: Peach French knots in the arrow head stitch at the top of the hoop.

Tuesday, 25th April: Lavender bullion knots in a ring to create the first of two flower at the top left of the hoop.

Thursday, 27th April: Aqua French knots in the centre of the flower.

Saturday, 29th April: Peach long-arm lazy daisy stitch - this was a new stitch, and I really like it. But it doesn't show up very well where I did it, so I think I'll be using it again somewhere.

Sunday, 30th April: Orange French knots in the centre of the second flower. 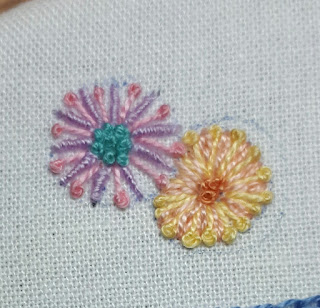 The photo at the top has a couple of extra days, as the photo I was going to share was a night-time one and very dark, so I rephotographed it today.