A Galaxy of stars


Today I made another 12 blocks for the Oh My Stars Quilt Along - here they are:

I made four Patchwork Stars. For some reason I made a conscious decisions not to make a 12" version. I can no longer remember why.... so I may go back and make another. 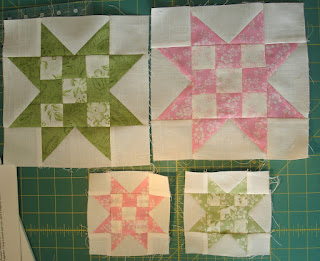 I made three Chevron Stars, which were really easy and pretty.

I made two woven stars... little buggers. Firstly, it's taken me about five attempts to get this tutorial printed. In ran out, paper ran out. Wireless network went down.... The green one has dreadful seams. I was ready to give up. But I'd already cut the pieces for the blue one. The seams on the blue one are far better. But I've put the colours in the wrong place - no - a different place to what I had intended. I still looks ok, but I don't think I'll be making any more of this block.

And then three nested stars. I really like these, and the design (and the patchwork blocks) have given me the opportunity to use some of the Dogwood Trail fabrics which have a white background. It took a while to get my head round the cutting, and each star is effectively two stars, so they were more work than the others.

I now have eight 12" blocks, nineteen 8" blocks and twenty-five 4" blocks - that makes a total of 52 blocks finished out of the 111 blocks I need - that's nearly half way - here is a photo of my progress chart. 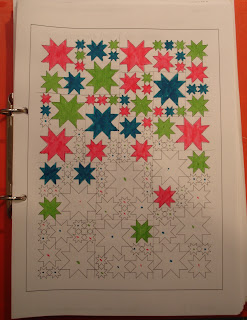 I'm nearly up to date on the 12" and 8" blocks, but only have half of the 4" blocks I should have. But I still love the fabrics I'm using and yesterday I bought some fabric for a border.


Yesterday I started another project. It's the twisted braid jelly roll quilt from"More Layer Cake, Jelly Roll and Charm Quilts" by Pam and Nicky Lintott and is lovely and straightforward. We're doing it in a series of workshops and I'm going to keep the progressto where it shuld be, rather than rushing ahead and getting it finished. I'm using Cabbages and Roses by Northcote Range for Moda for my jelly roll and I've added in some cream background. The finished quilt will be a 2012 Christmas present for Sheila.


My LQS has just brought in some flannel fabrics. They are gorgeous. Very usefully, a friend of mine is due to give birth to a baby boy in June and I've been on the look out for some fabric for a quilt - here is the fabric - isn't it beautiful.

I also got some more flannel to back my Chasing Chevrons quilt. It's going to be a summer quilt, so I'll quilt it without wadding to make it lighter, but the flannel will still give some snuggle value.

And a bit of luxury: a Puttin' On the Ritz Layer Cake in Grey. So I'm browsing for layer cake patterns - I've never owned or worked with a layer cake before.... I think I might just stroke it for a bit.


And the layer cake wasn't my only first yesterday - I also learnt how to drive in the snow. We must have had a good 1/4 inch of haily type snow. Not the nice floaty soft snow. It was horrid. It's all gone already today.
Posted by Jennie at 21:55

You are so busy and another project to top it off. You go girl, no stopping you now :o)

You have me beat....I am still working on the sparkling star...almost finished though, have three more small ones and then I am on to the next one! Spent the day working on a friends quilt today however, got it machine quilted on top and started getting the binding on.
Yours look great!!!

Your Oh My Stars blocks are great! I've only made one so far. Need to get working on those!

Nice stars, I like how organised you are .. filling the stars you have already made with colour. The only quilt plan I ever made was: at the end I should have 54 blocks. I'm aboslutely un-organised and go-with-the-flow. But I found some tutorials I woudl like to do, so maybe I will manage to get through them and stick to whatever I'm supposed to do (yardage, size, arrangement of blocks, borders ...)
And flannel is absolutely fabulous.
As to driving on snow - go slow on the gas, don't do anything hasty and go easy on the breaks.