.... there was a froggy called Fergie. Fergie lived with his mammy and daddy and was a good little froggy until one day. 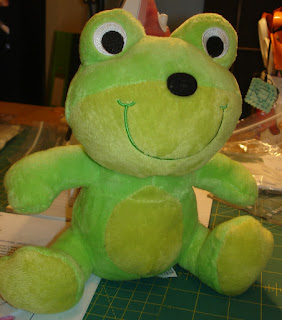 Fergie got up in the morning and felt like being a naughty froggy. He wriggled and squirmed when mammy froggy tried to get him dressed; he threw his cereal on the floor at breakfast; when they went out for a walk he lay down in a puddle and at bedtime he refused to go to bed. What a naughty froggy.
What Fergie didn't know was that all his bad behaviour was being watched by the Wicked Witch. Once mammy and daddy froggy had gone downstairs and left Fergie alone in his room, the Wicked Witch appeared. She was going to punish Fergie for his bad behaviour. She got a giant paair of scissors and cut him in half and took out his stuffing.

Then she disappeared as quickly as she had come.

Fergie was very scared and cried. He wished he hadn't been so naughty. A good fairy heard his crying and felt sorry for him. Fergie had been very naughty but the punishment was very hard.
She carefully stitched him up again, but still felt sorry for him.

She set to work making him a soft cosy blanket that would always comfort him. When she was finished, Fergie looked even better than before and he would never be sad again because of his lovely soft blanket.

When mammy and daddy saw his blanket the next morning they thought it looked lovely.

Fergie had learnt his lesson and was never naughty again and they alll lived happily ever after
This little froggy is for Aiden, who picked it himself. Ich hoffe, dass du deinen neuen Frosch magst, Aiden!
I was the wicked witch who cut the froggy in half - I really had to build myself up to do it - it felt like sacrilege. By the time I had finished him I was covered in green fluff. The fleecey fabric is beautifully soft, but an absolute pig to work with!
P.S. I didn't pick the name Fergie!
Posted by Jennie at 21:13

I want a Fergie too!! and no it's not jsut becuase he's a frog ... though that's the important part.