Back in January I decided to take part in the Tango Challenge. I decided on a beautifully garish colour combination of orange and pink. The "design process" has been a little haphazard and has changed every ten minutes, right up until I finally attached the binding this morning.


At one point I had decided to do an applique flower with a border made up of 1" squares in all different orange fabrics. It turns out I have a remarkably large collection of oranges in my stash. So I started making nine-patches. I fell in love with nine-patches, so gave up on the idea of applique and borders. I was always going to use black as my neutral colour, so had an idea of orange nine patches and another-colour nine patches in a lap quilt.

But I've really fallen in love with nine-patches and have an idea in my head of a rainbow quilt (not in the rules of the Tango challenge). So I reduced my plans again. I wanted a table topper for the glass table in our living room. Orange and pink? Orange and yellow? Orange and lime green? (Our living room is decorated in blue and yellow!). If it aint gonna match, it may as well not match properly! I went for pink. So pulled all of the pinks out of my stash and cut a 1 1/2" strip off of each. Then I pieced just one nine-patch in pink, picked out eight orange nine patches and a big piece of black. I tried wonky. Nope. I tried straight. Yep. A bit of raw-edge applique with a beautiful variegated Guetermann Sulky thread. At close of play yesterday evening I had finished top. My husband is away for the weekend, so I stuck it up on my "design wall" (lounge wall) with masking tape, went and made a cuppa, came back and.... it was going to be a wall hanging.

This morning I was going to quilt it with the same variegated thread. But didn't want to detract from the simplicity. So went for black quilting, echoing the squares. Binding: orange? black? pink? Simplicity = black. Ta-dah - a finished quilt just 16" square.

I've called this quilt Nine-Pins. Before I moved to the north-east of England, I lived with my parents in Bedfordshire and played in an English ceilidh band (traditional English music is like traditional Irish music, but more stompy). One of the dances we used to do was called nine-pins: four couples formed a circle and a extra person stood in the middle. They were called the nine-pin and would go up to each couple in turn and chose one of them to dance with. The rejected half would go into the centre. Once the nine-pin had danced with half of each couple they joined the four in the centre and circled until at some random point, the music stopped and there was a mad rush as every one in the middle tried to grab a partner, leaving one nine-pin (hopefully a new one) back in the middle to start again. It's the ceilidh version of musical chairs! We normally did it at the end of the evening once some drink had been consumed! My little pink nine-patch is my nine-pin! 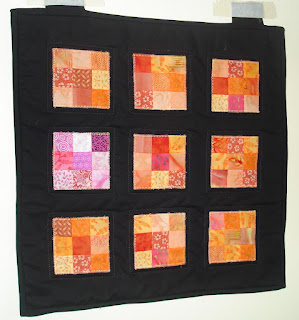 Result of this challenge: I LOVE LOVE LOVE orange. I didn't hate it before, but now I love it! Thanks for bearing with my ramblings today!

Wow, I think I could fall in love with orange after seeing this. It is great.

That's so cute. I love orange. Really don't have enough of it in my stash =D