Yesterday evening was Friday night sew in. I had planned to work on a project that needed some TLC, but the attention-seeking Swoon won over. Last weekend I completed the final of four 12" blocks and I had planned what I wanted to do with the sashing so it was time to pull everything together. It took a bit longer than I had planned but here it is: 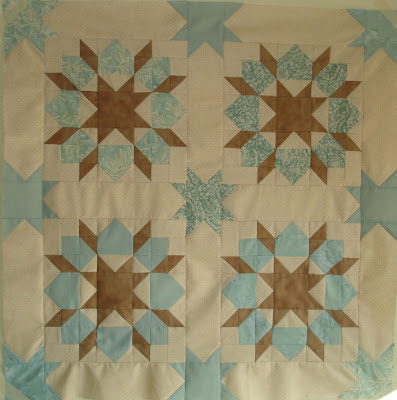 The centre brown square in each of the Swoon blocks is 31/2", so I cut my sashing to the same width and used the blue fabrics to make stars in each of the corner stones, mirroring the stars in the centre of each swoon block. Once I've decided how to quilt it (maybe something like this), I'll finish it off with the brown fabric as binding, which I hope will frame it (it's going to be a wall hanging).

You can't see it well from the photo, but the blue in the centre of each side is striped, and the same fabric is in the botttom left block. If I can get stripes to work with Swoon, I should be able to use stripes in any other block.
My big swoon (nine 24" blocks) will be finished off a little differently, with narrower sashings and no cornerstones, as I don't have enough of the Happy Mochi Yum Yum fabric to do something similar.
Posted by Jennie at 13:53

The blues and the brown go lovely together and the cornerstone stars pull the whole quilt together. It is beautiful !!!

Love how you pulled it all together! Looks lovely!

Beautiful! What is the final size of your Swoon quilt?

I love the way you have put this one together. Any ideas on how you will quilt it?

Just a quick update - the finished top is 33inches square!

I love how it turned out Jennie! So pretty.

Popping in via FNSI - that top is stunning.