I'm wrapping up my swaps for this year - no more until well after Baby comes. This is my penultimate swap commitment and is the second round of the Easy Swap UK. This time, rather than just making a mini, the swap was for a mini, a zippy or a bag. My partner was happy to receive any of the three, and as I don't make bags, but do make a lot of minis, I decided on a zippy.

Everything is taking so much longer to complete at the moment... but I finished this Sew Together Bag in time for posting. 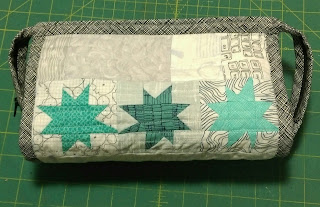 My Partner, @Daisybuttockup, said at the start that she liked aqua and low volume, but no white. I have to confess that once I was finished, I was worried that there was a bit too much white low volume... Even though in the photo above, it looks like there is white included, I promise it isn't! 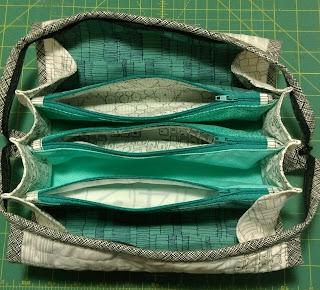 I pieced improv stars on the outside and then went to town with the aqua on the inside, having restocked my zips (I only had pink left.... not really ideal).

The extras on this swap were limited to one item, which cost under £5 or took less than one hour to make. Those guidelines are tough and with time against me I couldn't make up the matching pincushion and needlecase I had planned. Instead I included the remains of the turquoise fat quarters I had used - plenty of fabric if my partner would like to make her own matching accessories.

And look what I got in return from Amanda @amandawhall 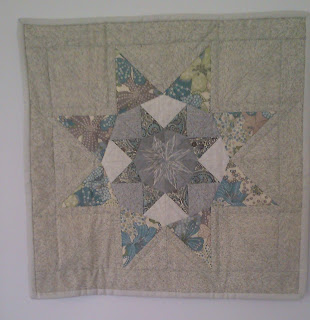 The Sew Together Bag was on my Finish Along List for Q4 too.

This is gorgeous, aqua is my favourite colour too and I would be thrilled to receive such a gift. You have a very lucky partner, i am sure she will love it. x

Gorgeous work there Jennie, your partner will love it I'm sure!
How are you feeling, not too sick or tired I hope!

I am amazed & impressed that you swapped a Sew Together Bag! I made myself one of these and knew it was MINE to keep. What a generous gift!! Visiting as part of the 2015 FAL Cheerleading Team. Thanks for participating! **giggles**