I had been planning to post this once my partner received this parcel. According to tracking, it was delivered 10 days ago, and I haven't heard a word from my partner, so I'm assuming she has a good excuse and I'm sharing this anyway....

This is it. My last swap commitment. I am absolutely not signing up for anything more until Baby is here and we are settled into some kind of routine - so maybe 10 years time if I'm lucky (I haven't said what sort of routine). Even if I am very, very tempted.

My partner, gave me a really clear list of likes - designs and colours. This made it so easy for me to put together a quilt for her. The design is by Julianna @sewingunderrainbow and appeared in an old issue of Love Patchwork of Quilting. I knew way back when I first saw it that I wanted to make the quilt, so when I was cutting the fabrics for this swap quilt, I cut double, so hopefully in the not too distant future, I'll have a matching quilt/cushion cover. However, like childbirth, it will take a little time to forget the pain of all those curves! 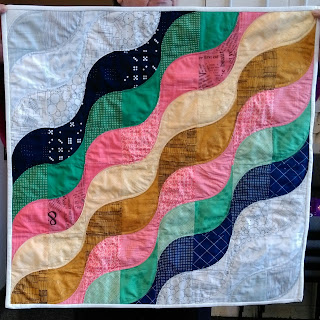 The colours that she liked were also some of my favourites and as such I could use some of my absolute favourite fabrics: Architextures, Zen Chic, Art Gallery, Painters Canvas, Domino Dots, Doe, Cotton and Steel, Botanics... sadly I actually used up all I had of some of the fabrics so there'll be a few differences when I make my own version.

There was a lot of swearing when I was drawing round the templates and cutting out the pieces. And also when I was piecing all the curves. I used Leanne's brilliant no-pin tutorial (this quilt would not have happened if I'd been pinning every curve). When it came to pressing, a lot of steam was involved (and more swearing). To be honest, it's a miracle the final quilt lies flat!

A kept the quilting minimal - there's so much movement in the piecing, that I didn't want to lose that flow. I used my walking foot and echoed the seam lines between the colours, hopefully emphasizing the movement, rather than diminishing it. The binding is the white on white cross hatch from Carolyn Friedlander which I've also used for the very outer neutral corners of the piecing. 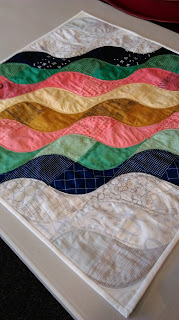 With all of that swearing, errors when drawing round templates and cutting out fabric, dodgy seam allowances and steam, this quilt has come out a little bigger than it should have mathematically - I hope my partner doesn't mind too much!

I've added a few extras to the quilt.... some fat quarters of Carolyn Friedlander's new fabric, Carkai; some Northumberland tea bags; and a local post card which I picked up on a recent trip to the Baltic Art Gallery in Newcastle.

And here is what I received. 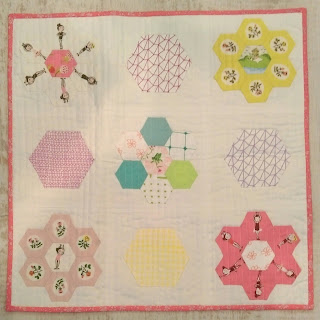 Much as Mia would like to steal it, we found out yesterday that the chances are baby number 2 is a girl! She was being an awkward little monster, and flipped over halfway through the scan, so the medical checks couldn't be completed - we'll be back for another scan next week. I think this quilt will be put away carefully and saved for her arrival next April!

The pig quilt which Madeline sent as an extra has already been claimed by Mia! 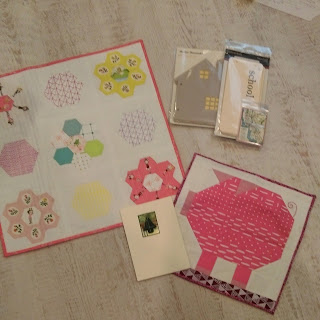 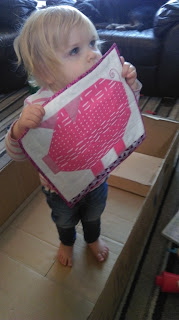 For the rest of the year, when I do have the energy to sew, selfish sewing, and sewing for Mia and Deuteronomy will take priority. Yes Deuteronomy.....You know how people call their unborn babies by nicknames? Biscuit, or Sweetie, Peanut, Baby Bear etc.etc? Well Michael, in his quest to come up with highly unsuitable names for Mia, decided bump would be Corinthian (or Corinthina) when I was pregnant with her. Well this baby is Deuteronomy (Deuteronomina?) or Little Deut... I guess he thinks he's funny.

The quilt I sent was on my list of Finishes for Q4 of the Finish Along.

Lovely swap items, you were very brave doing all of those curves. I must say the pig is especially adorable.

A lovely little quilt - must admit I would shy away from curves! Anyway, well done and I love the little quilt that you received. xx

I love that mini and here you are saying nice things about me too! I'm visiting as part of the 2015 FAL Cheerleading Squad.