My first finish for Q4 of the Finish Along. I started off with a list of 33 items and now we're down to 32. We're also a third of the way through the quarter already... I'll let you do the maths on that one!

Earlier in the year I bought a mini charm pack of Joy by Kate Spain. I already have a quilt made from a Jelly Roll of this line. However, that is in a drawer half of the quilting waiting to be unpicked because of a disaster with wool wadding... anyway. I thought it would be nice to have a cushion to match if I ever get the quilt finished.44

I made the same cushion that I made last year for a friend as a Christmas present. It's a rough approximation of a cushion made by Nana Company. My mini charms are in a slightly different arrangement based on the size of the cushion form I had, so it finishes at 20" x 12" or thereabouts. 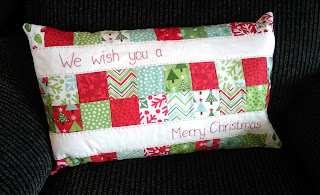 I embroidered the words and did the minimal quilting just after my op, sitting on the sofa, taking it easy. And finally two weeks ago I added the back and last weekend I bought a cushion pad. It's the same backing fabric as I used on last year's cushion, but I didn't have quite enough to get the directionality the same way as the zip. In the interest of #sewmystash I used the fabric anyway. I used this tutorial to add the zipped back - I don't understand how it works, but it does, every time!

It's a bit early to have it out on the sofa already, but somebody stole it... 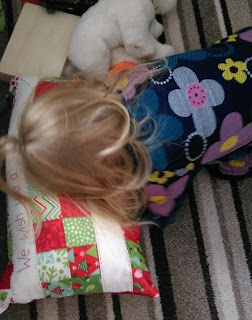