Last year we swapped houses with my mother-in-law. We now live in the house where my husband grew up. Just across the road is a neighbour he and Linda have known forever. When we found out she was moving away, Linda wanted to make a quilt for her. 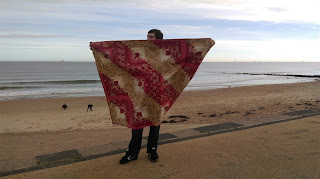 She picked creams and reds from French General's Rouenneries Deux and Lumiere de Noel ranges. We picked up half a metre of each and wanted to make 18" blocks. Except it wasn't enough fabric. Whilst we had plenty enough for the small logs, we didn't have enough for the longer, outer logs. So we made an executive decisioin that we weren't driving back to the shop. With the reds, we swapped the colour order: the original plan was light logs in the centre, getting darker. Six of the blocks are like this. The other six... the first log is still the same, but the other logs are the opposite way. With the lighter logs, I cut width-of-fabric strips, pieced them together and then cut the logs I needed, so there are some extra seams. In fact there are more extra seams than planned because the last lot of cutting didn't go quite to plan! 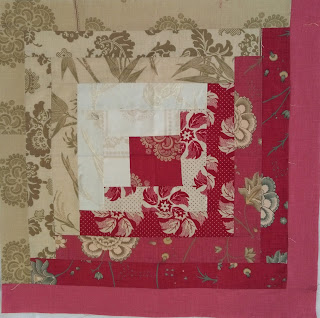 And you know what, the quilt is still lovely, and if I hadn't told you all that, you probably wouldn't have noticed. In fact, having two sorts of blocks makes that middle stripe stand out!

I pieced the blocks over the course of a few weeks. To be honest I found them quite tedious, because once I got to the outer logs I really need to pin the next strip to stop the block from going squiffy. A log cabin quilt is still on my bucket list, but this quilt taught me to make smaller blocks so I don't need to pin! 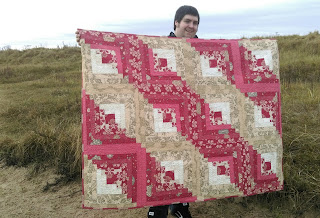 It's backed with a sheet and quilted with an all over stipple in Aurifil cream. It's bound in a bit more French General, though I don't know which range.

The finished quilt is 52" x 70" and this is a Finish Along finish. You can find my original list here.

What a lovely gift and so beautiful. Rule #1 - never apologise because most people will not have a clue what you are apologising about! xx

It's gorgeous! And congratulations on the finish!

Another terrific finish! What a good quarter for you. On behalf of the 2016 FAL team of hosts, thanks for sewing along with us!