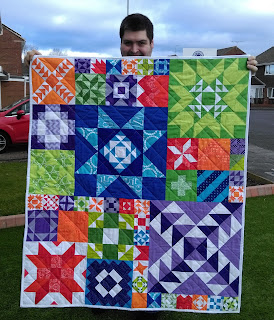 Just after Jessica was born, we learned that Michael's cousin was expecting her first baby. She was one of the cooperative ones - those who share the sex of their baby in advance, so allowing us quilters to plan and start work!

I decided to use the Moda Modern Building Blocks pattern for a baby quilt. It's a pattern I've been thinking about doing since I first saw it, and I just needed a good excuse really. However, it's not really a baby sized quilt. Easily solved: I shrunk every block by 50%. In the original quilt, the largest block is 36" and the smallest 6". In my version, the largest is 18" - which feels enormous as far as I'm concerned, and the smallest is 3" - which feels quite normal after working on the #365 quilt all last year. I have to confess, some of the maths made my brain hurt, but in every case, I got there. I have to admit, there was the odd 16th of an inch thrown in. 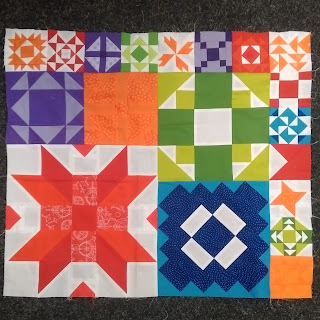 I joined in with a quilt along on Instagram for the most part, but fell off towards the end as Christmas stitching got into full swing. Baby was due early January, so I knew I had some lee-way - plus I've never had a baby quilt finished before the baby arrives except with my own daughters! I finally finished the final few blocks at the end of January.

It took another few weeks to get it quilted and bound. I decided that there was plenty of interest in the peicing, so the quilting needed to be quite straightforward. It's quilted in a 3" cross hatch in white Aurifil 50w thread. I bound it in white. I know that this is not necessarily a practical choice for a baby quilt. But I don't care. It looks so lovely and fresh,. For the moment. 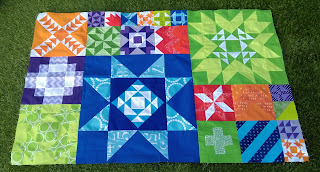 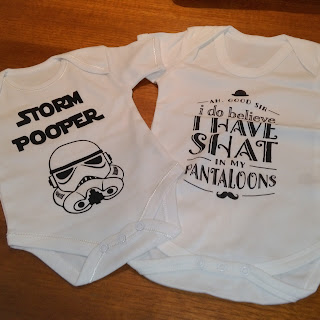 I think this may be my first Finish Along finish for the quarter. You can find my original list here.

It's wonderful and I love the idea of shrinking the pattern to make it baby-quilt friendly! Congratulations on the finish!

Lovely! I love the colours

Lucy | Charm About You said...

It is beautiful! The baby grows are hilarious! Thank you for participating in the FAL, on behalf of the 2017 global FAL hosts.