#1yearofstitches [some background and week 1]

Last year I did quite a lot of embroidery. And I really enjoyed it. Embroidery is where it all started for me - I grew up with cross-stitch, but about 8 years ago I saw a quilt hanging at a show with free embroidery on it. I talked to the stall-holder but decided it would be too complex for me. Two years later I finally bought the pattern and the fabric for the quilt - it just stayed with me, and every time I saw it, I loved it. And that quilt led me into quilting... fast forward to the start of last year.


Embroidery was still a constant part of my sewing routine, but, despite trying out some new stitches on Mia's advent calendar, it had got a bit stuck. Backstitch, French knots, chain stitch, lazy daisy stitch. That was pretty much my repertoire. But I didn't realise how stick I was until I stumbled across a new-to-me embroidery designer called Kelly Fletcher. It was one of those moments. I browsed through her Craftsy shop and pinned nearly everything to my embroidery board - in a "I want to sttch that NOW" kind of way. I picked out a single pattern and that's when I discovered that she isn't a backstitch kind of girl! I mean, there's backstitch there, just not much. She's a stem stitch girl. Horror. My only experiences with stem stitch have not ended well. I had a decision to make: follow her instructions and give it a go or use her design as a basis and use the stitches I was comfortable with. I decided to give it a go. And whilst my first bit of stem stitch is in no way perfect, I could see improvement very quickly. 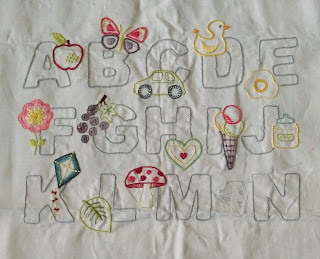 Stem stitch is now as natural to  me as backstitch was and I now use it more often than backstitch. The design I chose also included other new stitches. Some have been more successful than others. And having started this adventure I was keen to find more embroidery stitches and integrate them into my every-day embroidery.

So when I saw the idea of #1yearoftstitches I was sold immediately. The idea is you get an embroidery hoop and a piece of fabric and every day of 2017 you add something. My aim is to be totally free-form. Each day pick a stitch and a colour and just go for it. I've chosen a 6" hoop with the intention of it being solid by the end of the year. I hope I don't regret not going for a larger size! And here is my effort for the first week. 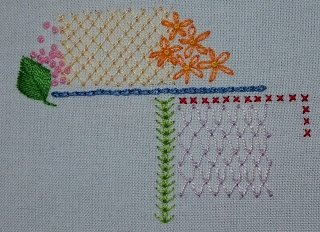 I'm using Finca #16 perle threads for all my embroidery. My plan is to write a quick blog post each week to show progress here. Or you can see my daily photos on my instagram account @jenniesthreads.
Posted by Jennie at 19:00