Christmas Cushion Along [A {late} Finish]

I think I've finally finished sharing all of the finishes from December, so I can share with you my first finish for 2017! Just in time to be packed away with all the Christmas Decorations, I've finished my Snowflake cushion. 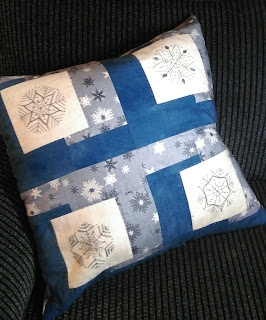 Back at the end of October, Helen - Archie the Wonder Dog, threw down the #ChristmasCushionAlong challenge. It wasn't hard. Make a cushion by Christmas. I sketched out two ideas. One remains nothing more than a sketch. The other has gone through quite a few iterations. 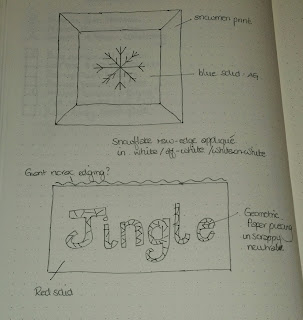 I liked the idea of embroidered snowflakes. I hunted on Pinterest and couldn't find anything I liked. So I designed my own. These are the same snowflake designs I used for some of the Christmas ornaments I made in December. 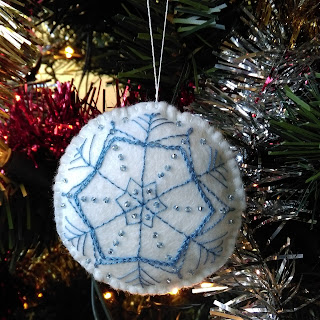 At about the same time, I was finishing up the blocks for the Tula Pink City Sampler as part of #100days100blocks and one of the blocks struck me as a great way of displaying a piece of embroidery - a rectangular piece of embroidery. Snowflakes are round - or display nicely in a square. Not a rectangle. So I took the block design and squared it up. I made four and laid them out as I had planned in my mind. You know that sudden "oh shit" moment when you realise it looks like a swastika... that's how it worked out. So rather than rotating the blocks round the central point, they are all oriented the same way. This was the quick part.  It took me a while to get round to the embroidery - everything else took priority and it was pretty clear the cushion wouldn't be done by Christmas.

A concerted effort on New Years Day and the day after to finish the final embroidery, add some hand quilting and make the back of the cushion and it's done! Better late than never. And I think I'll be using those snowflake designs again! 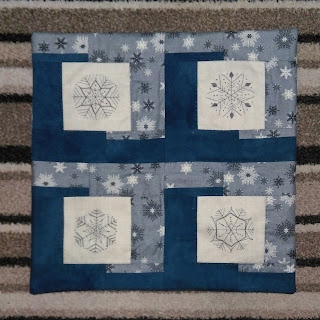 I had planned to use fabrics from my stash but couldn't resist these fabrics at my local quilt shop - best of all is the backing!

As for the other cushion - hopefully next year!

And to celebrate the cushion's completion I got out the new mug I received for Christmas! Harry Potter fans, this is the Holy Grail! To start with the mug is black and say "I solemnly Swear that I am up to no good". When you add hot water, the black disappears to reveal the Marauders Map. And once you've finished you tea, right at the bottom of the mug it says "Mischief Managed". How perfect is that!!! But the mug does break my rule of nothing in the house that won't go in the dishwasher! 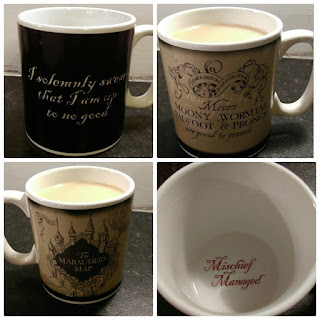 I love the snowflakes! Nice cup!