I am still thoroughly enjoying this project, but it is becoming increasingly difficult to stop at just "one" stitch - I can see the next few steps and I'm desparate to keep going. So far, I have mostly controlled myself! Here is how my hoop looks at the end of week 3 - I'm not sure this is going to last 52 weeks! 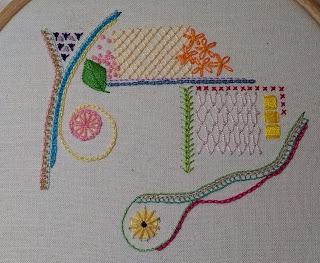 18th January: A peach bullion knot wheel. I've only atempted bullion knots once before and they were a total disaster, so I was very pleased with how these went!

19th January: I added pink button-hole stitch around the endge of the bullion-knot circle - mostly it looks quite neat... I also added a few pink French knots to the centre of the circle.

20th January: a yellow chain stitch swirl to link the bullion knot circle to the existing sweep of stitches.

21 January: More experimenting - this time I tried my first ridged spider web. I really enjoyed this stitch - the hardest part was getting the spokes evenly spaced. I also extended the green stem stitch I did a while ago to loop round this element. Not sure I like the look right now, but I have plans of where I want to take it - this is why I want to keep stitching - I don't like it now, but I know I will once I stitch the next few elements!

22 January: I added a line of deep pink chain stitch - I like chain stitch. This will help will that previous element, but hasn't achieved the desired result yet! I also added a single navy French knot to the centre of the spider web.
Posted by Jennie at 19:00