I am insanely pleased with this finish - most of it was just a little bit outside of my comfort zone... 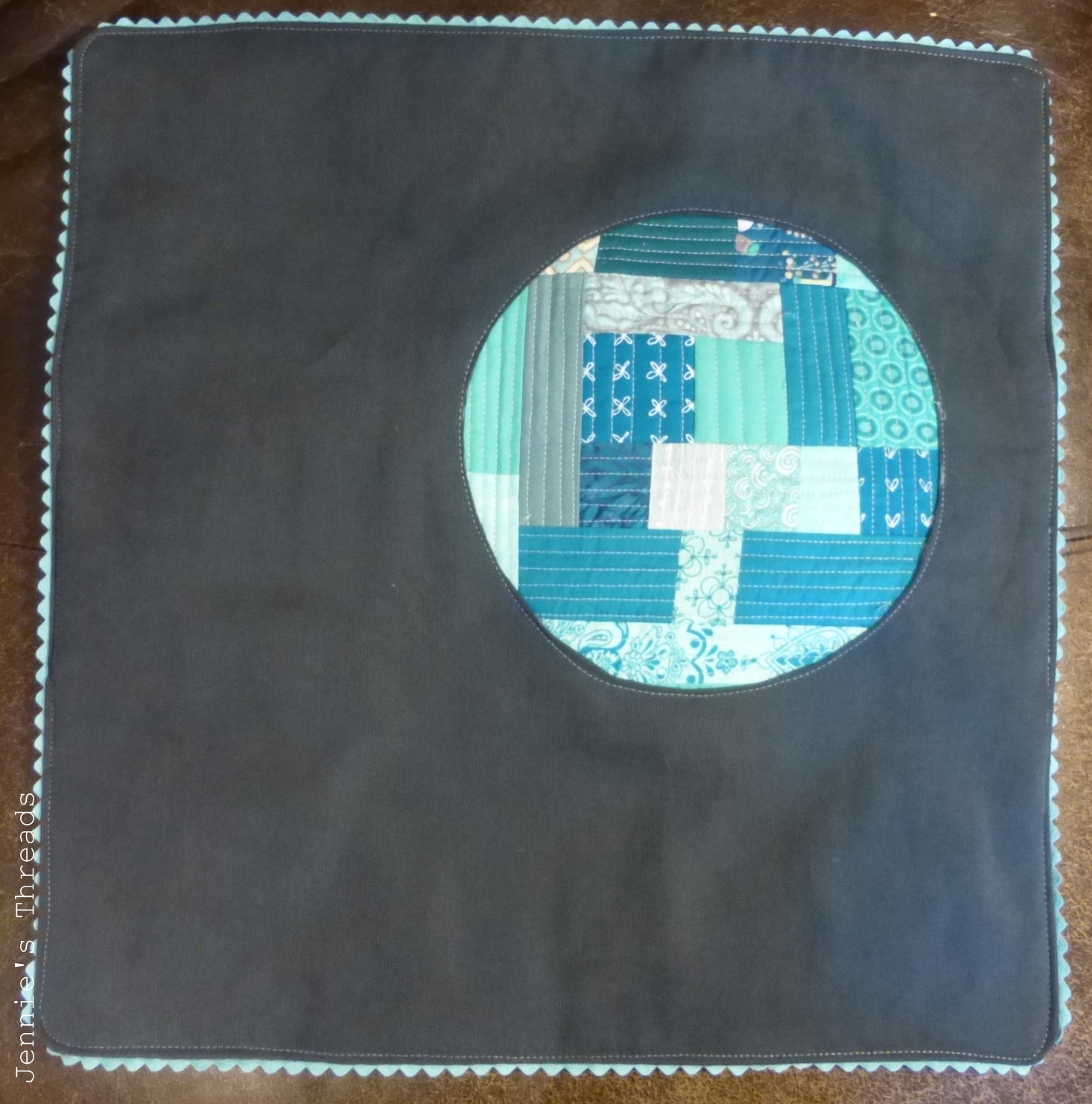 Months and months ago Susan (Canadian Abroad) hosted an Instagram giveaway - repost the project she had made which you liked most and she would make you one. I reposted a gorgeous scrappy cushion (you can see it here). Only one member of my family followed me on Instagram at that point, and she decided that she liked the cushion: "can you make a cushion like that?"... "possibly."..."in turquoise and grey?" My family are known for their subtlety - this was the same family member who when I was first brought home from University to meet my boyfriend's family (after dating for just two weeks) asked if she could be a bridesmaid. Any sensible woman would have run a mile. But we did let her be a bridesmaid.

I figured this would make a great Christmas present! I dug out my turquoise scraps and got my husband to do a sneaky colour match. And then I did some improv piecing. I'm still not comfortable with this but I'm getting happier. The circle insert of the cushion is made entirely from my scrap box, and made no dent in my scraps whatsoever: there's some Karen Lewis screen printed scraps, some Tula, some Art Gallery, a fair few solids, a batik and some Tilda (that's what I can identify anyway). 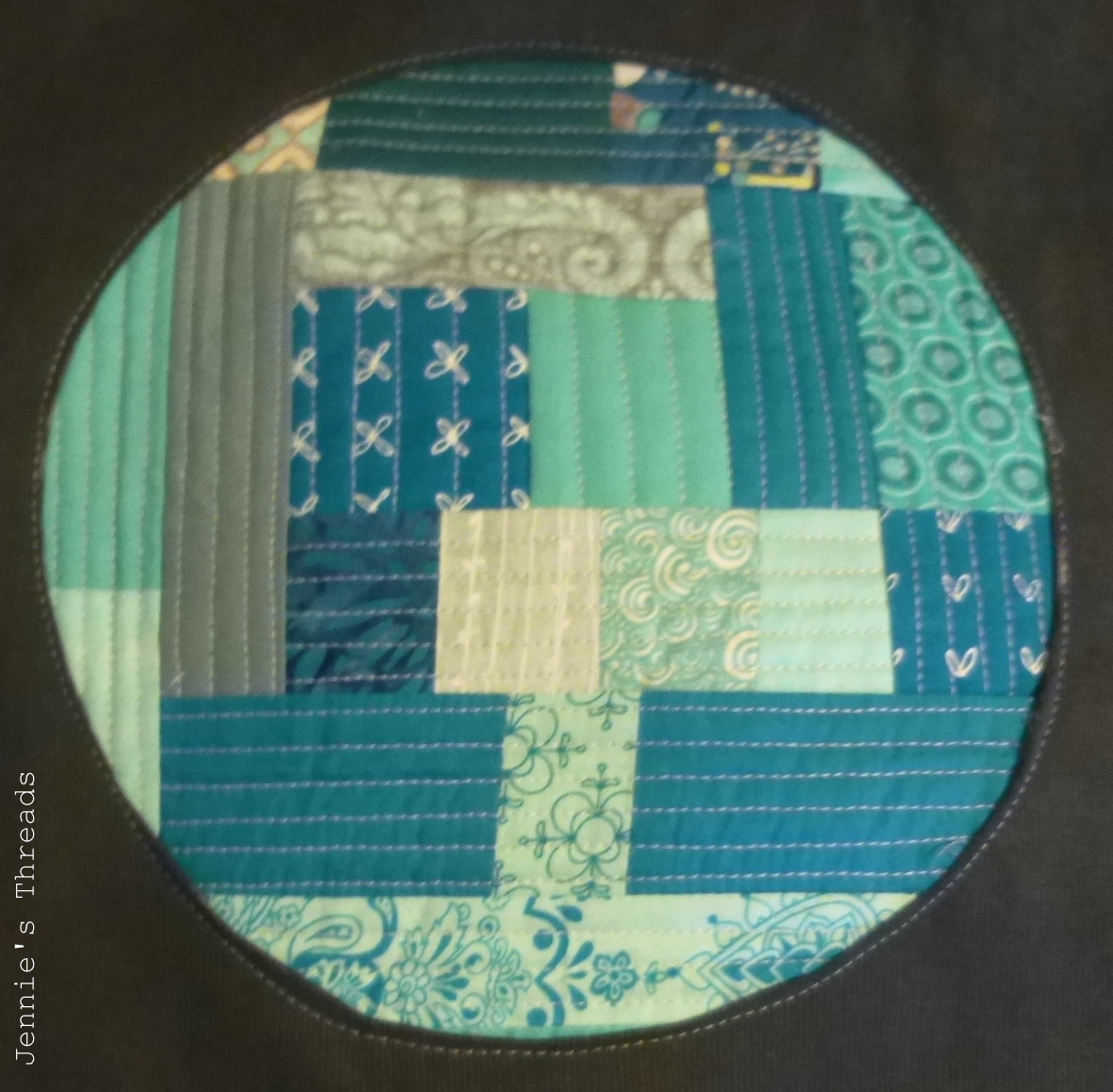 The grey fabric is quite strange. It looks like needecord - a bit. But it isn't. I don't really know what it is, but it has some texture to it which makes it a bit more interesting than just a plain dye. It's also wider, so I got the whole cushion (front and back) from one width of fabric (there's enough left to make another three cushions - don't hold your breath). It was also stretchier.

I used the technique from Pile O Fabric's Skill Builder BOM up to the point where I didn't have starch and the glue didn't stick. So I top-stitched it in place, rather than hiding my stitches as she does.

I thought about adding piping. I've only made piping once and I don't remember enjoying it. I do remember breaking at least 2 needles. So I went on a ric rac hunt and found the perfect turquoise, which I basted to the cushion before the final seam. And once done it needed a final top-stitch round the edge. I think it would have looked a bit dull without it, but this could have gone badly wrong - there was a lot of breath holding and finger crossing with this step. 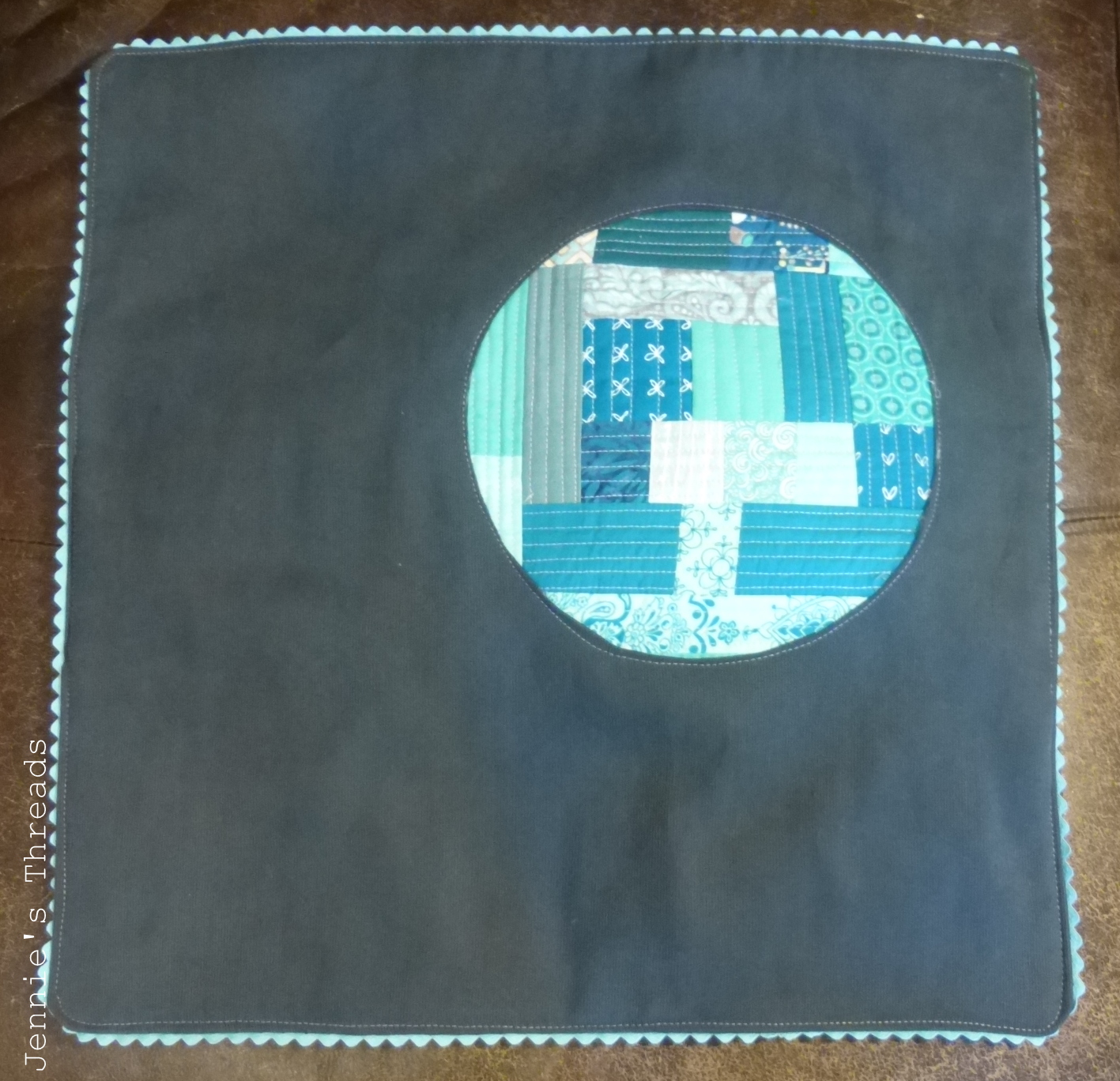 I'm going to link this up with Leanne and Nicky - Scraptastic Tuesday!

I'm now thinking about the feasibility of a moustache shaped opening... is that a step too far?
Posted by Jennie at 21:13

Following in Susan's footsteps is always a good thing and it looks great. Looking forward to seeing the moustache though - do please give it a go!

Thanks for linking up your #scraptastictuesday project!

This is lovely! Beautiful blues and love the ric rac edging!

Great cushion and the ricrac edging really does give it a lift. xx

It's so fun to see how others are using scraps with the linky party. I'm not completely comfortable with improv piecing either but it looks like you're well on your way.

I find improv harder than following a pattern too! The cushion looks greats, for a relative who's certainly not afraid to say what she wants! Hope she loves it.