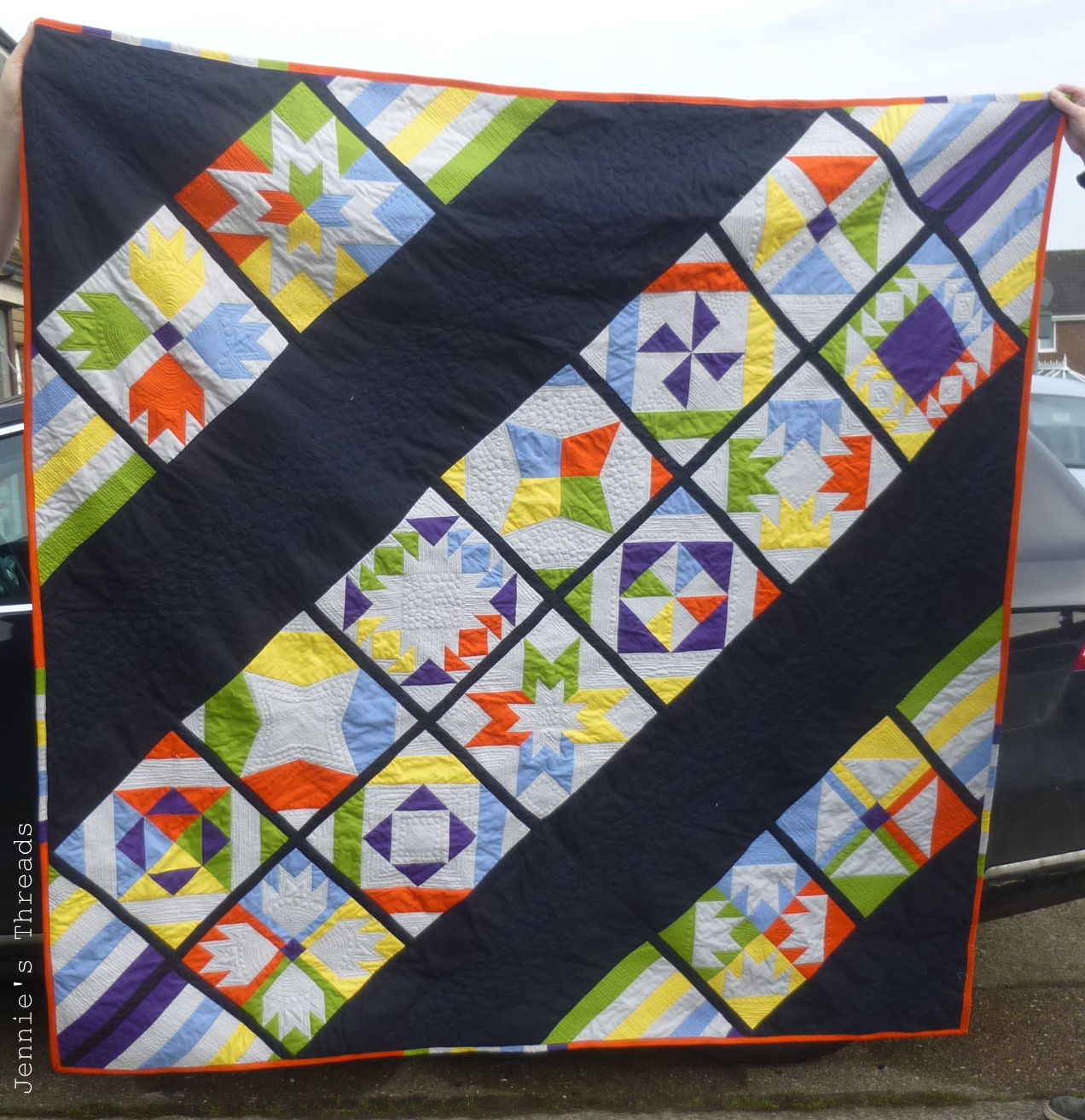 This was a bit of a slog, if I'm honest. There are some things about this quilt that I love, but there have been moments when I didn't love it: I love the setting - it's so fresh and modern and the negative space invites interesting quilting; I really struggled with the fabrics I chose and there were a lot of challenges to get it finished. 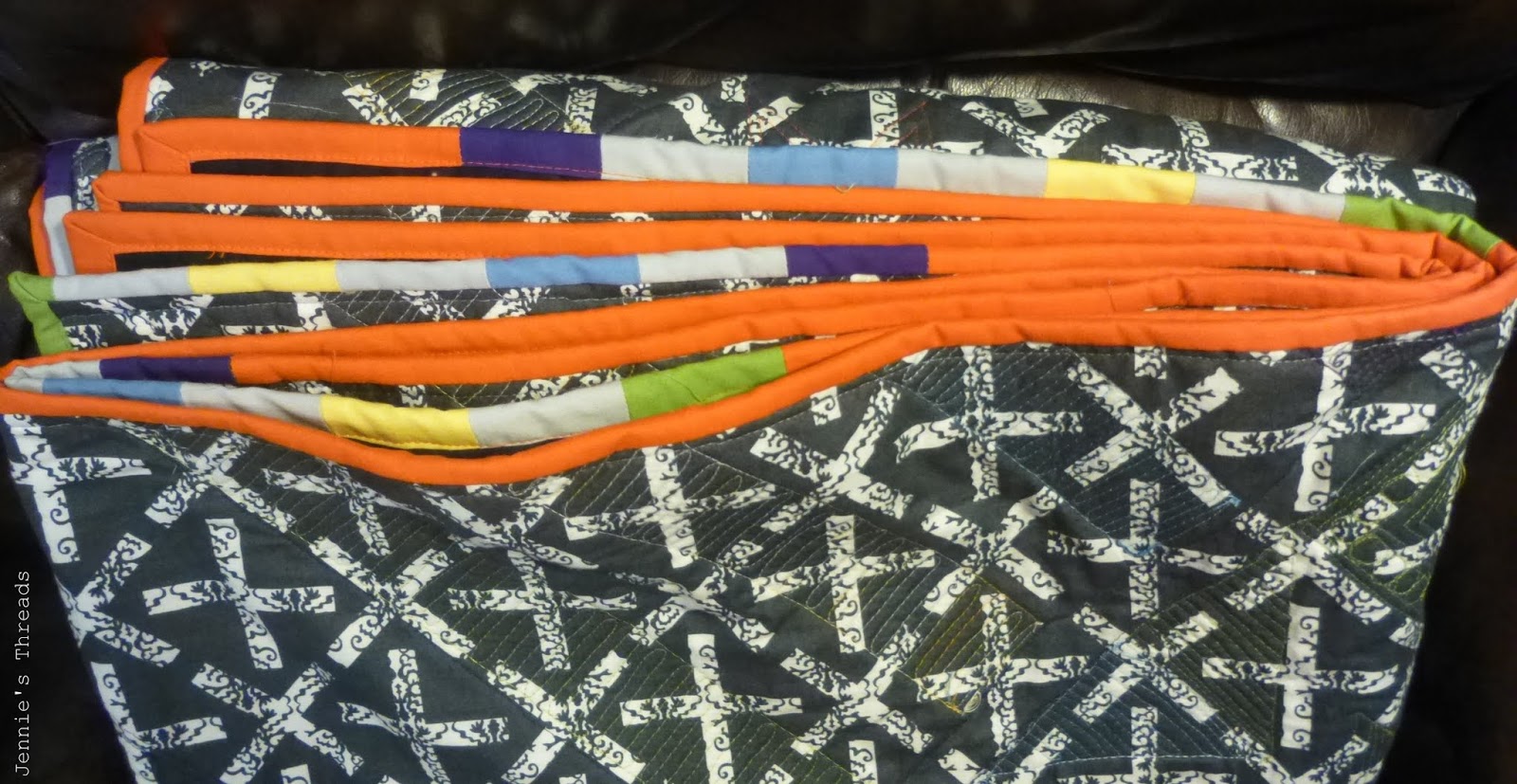 So, the fabric. From day one this was a quilt for Michael. I started by pulling fabrics from my stash. 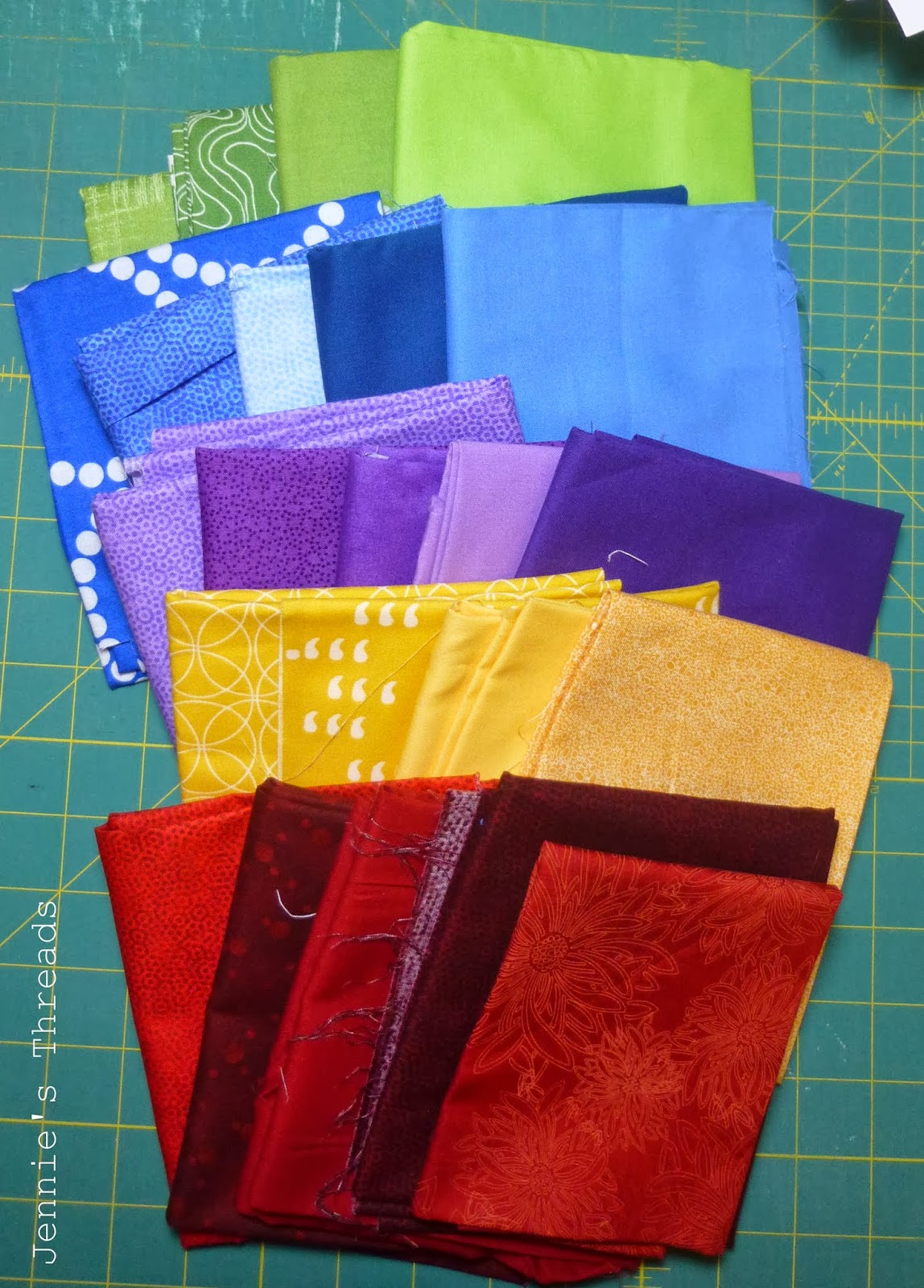 But I wasn't convinced. The pattern called for five colours, and having seen some of the finishes popping up in the Flickr quilt, I could have selected a slightly more refined colour pallette whilst still maintained 5 "colours" and the necessary contrast. But I didn't. I picked red, yellow, green, blue and purple. It also didn't feel very masculine. So we swapped it for solids. Michael used my Kona colour card and we picked Canary, Lime, Tangerine, Denim and Purple. 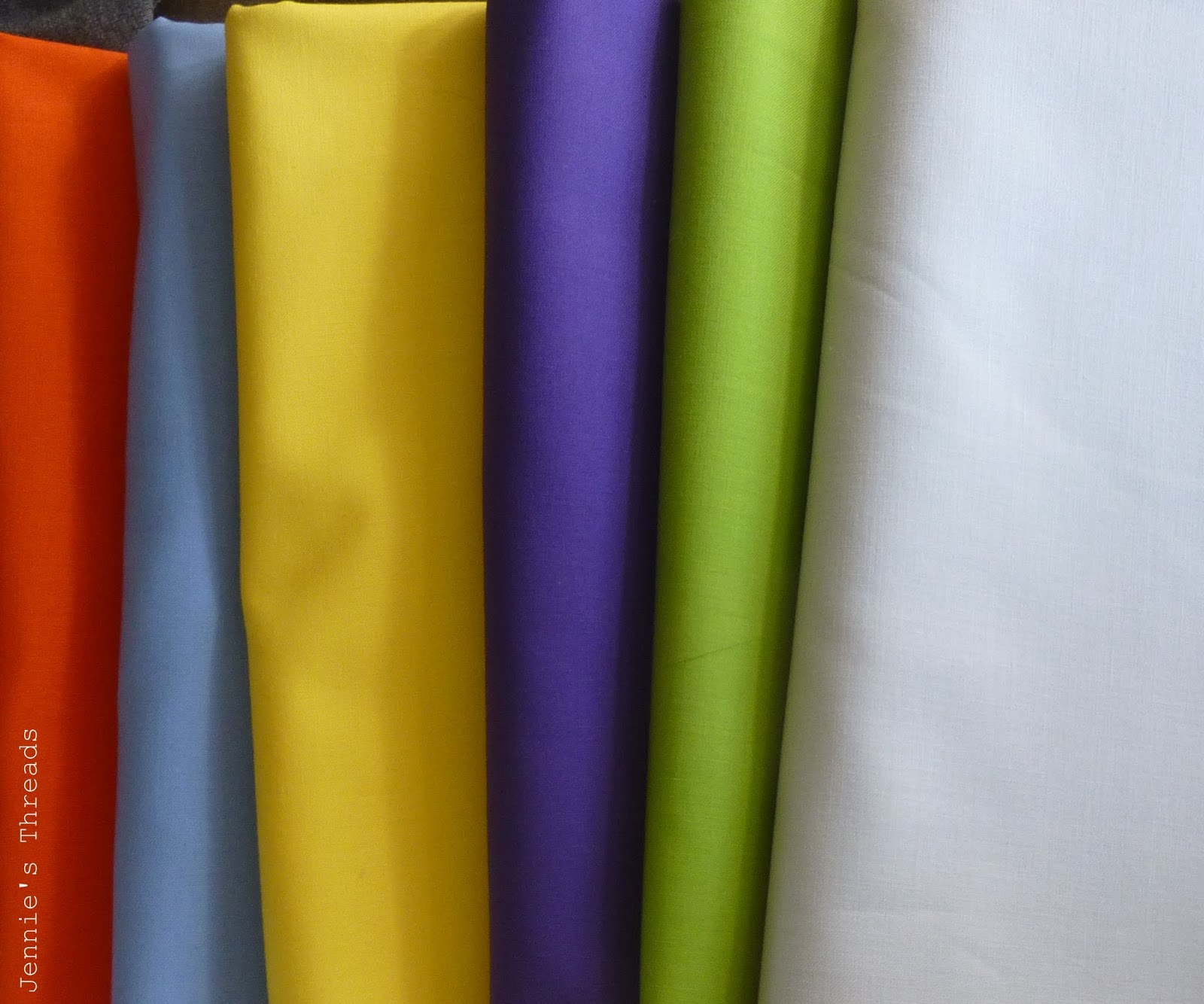 I made the first few blocks during very early nap-time sewing sessions when Mia was very little. Still not sold. The in August I decided that I needed a reason so plough on - I'd already bought the fabric and it was Michael's choice. Christmas. The quilt would be finished and gifted at Christmas. Without him knowing. Easy. After the September block was released I cut all the fabric for all the remaining blocks. I was on maternity leave, so I could continue to sew during nap times and Michael would never know. I got most of the blocks pieced. I picked up some backing fabric on sale. I matched the backing fabric to my Kona colour card and ordered the sashing fabric. It arrived. Totally different colour to the backing fabric. But actually I liked it, so stuck with it.

Then I went back to work. And nap time sewing was a thing of the past. I had twenty completed blocks and the fabric to complete the quilt top. And backing fabric. But when I was at home, I was either with Mia, or she was in bed and Michael was here. So I started going to a patchwork club on a Monday night. Very quickly I was piecing the blocks together. I did little bits in snatched moments at home, very nearly caught out when Michael got home from work early one evening. 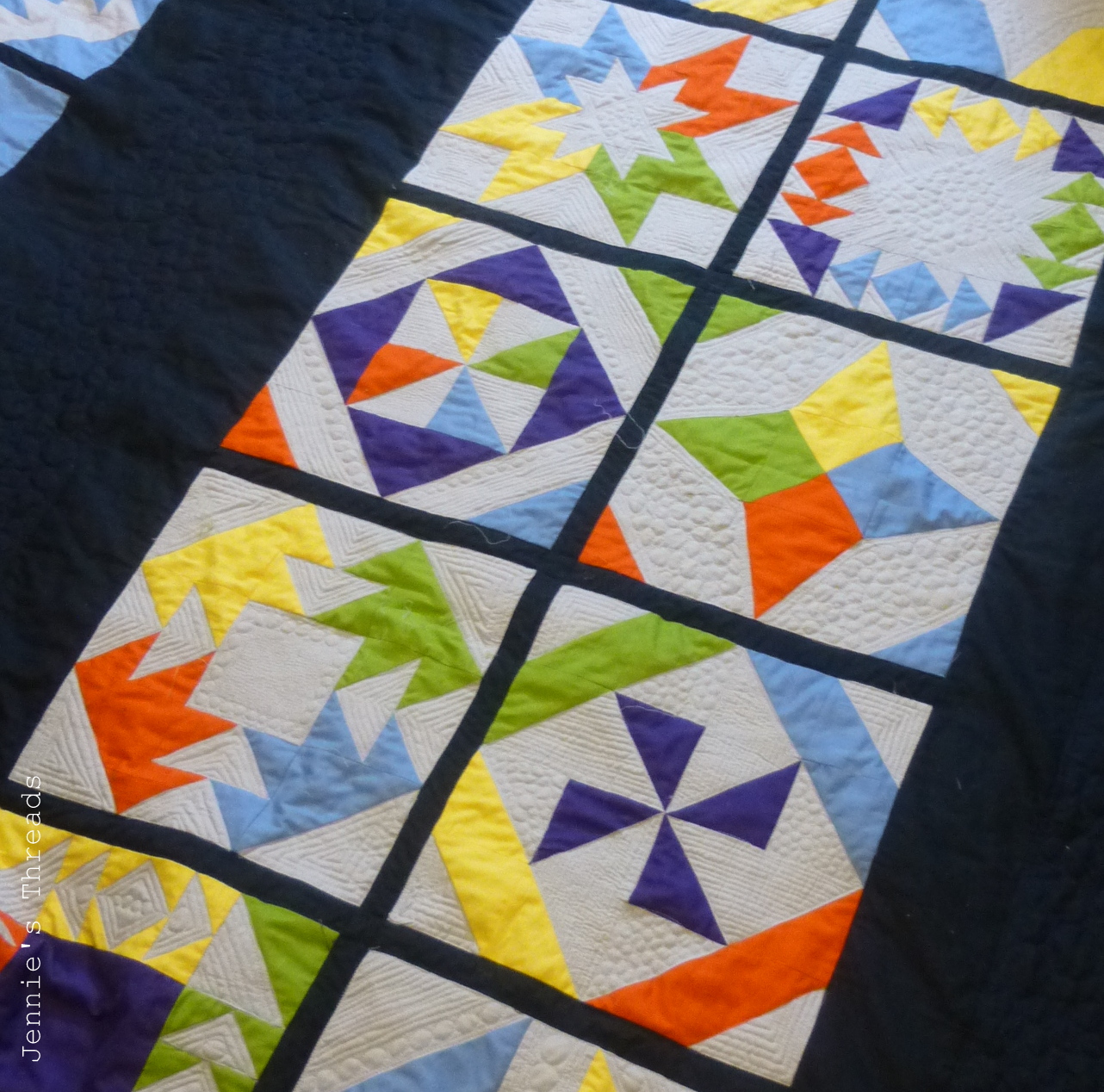 At the end of November Michael went away for a weekend. My parents came to visit, and I had it all figured out: Friday evening solid quilting before my parents arrived, and then convince Mum and Dad to spend time with their granddaughter and try and get the majority of the quilting done over that weekend. I sat down during nap time on the Friday afternoon and ditch stitched round one block. Skipped stitches. I probably swore. My machine had had a timing issue but was only back from getting fixed two weeks earlier. So this time I rang Brother direct. Within two hours, a courier had picked up my machine to go to HQ, and my mother-in-law came round with her sewing machine for me to use. Unforunately Mia also woke up, so I got nothing done in session 1. Friday evening was good - I quilted 5 of the 20 blocks. Saturday was a write off. I didn't touch the machine. But Sunday morning I hit it! The central section of 16 blocks done! Sunday evening I kept going - Michael had told me he would be home about 10. So at 9.50pm I put the quilt away - I think I was about an hour away from a fully quilted quilt. And then he didn't get home until 11! 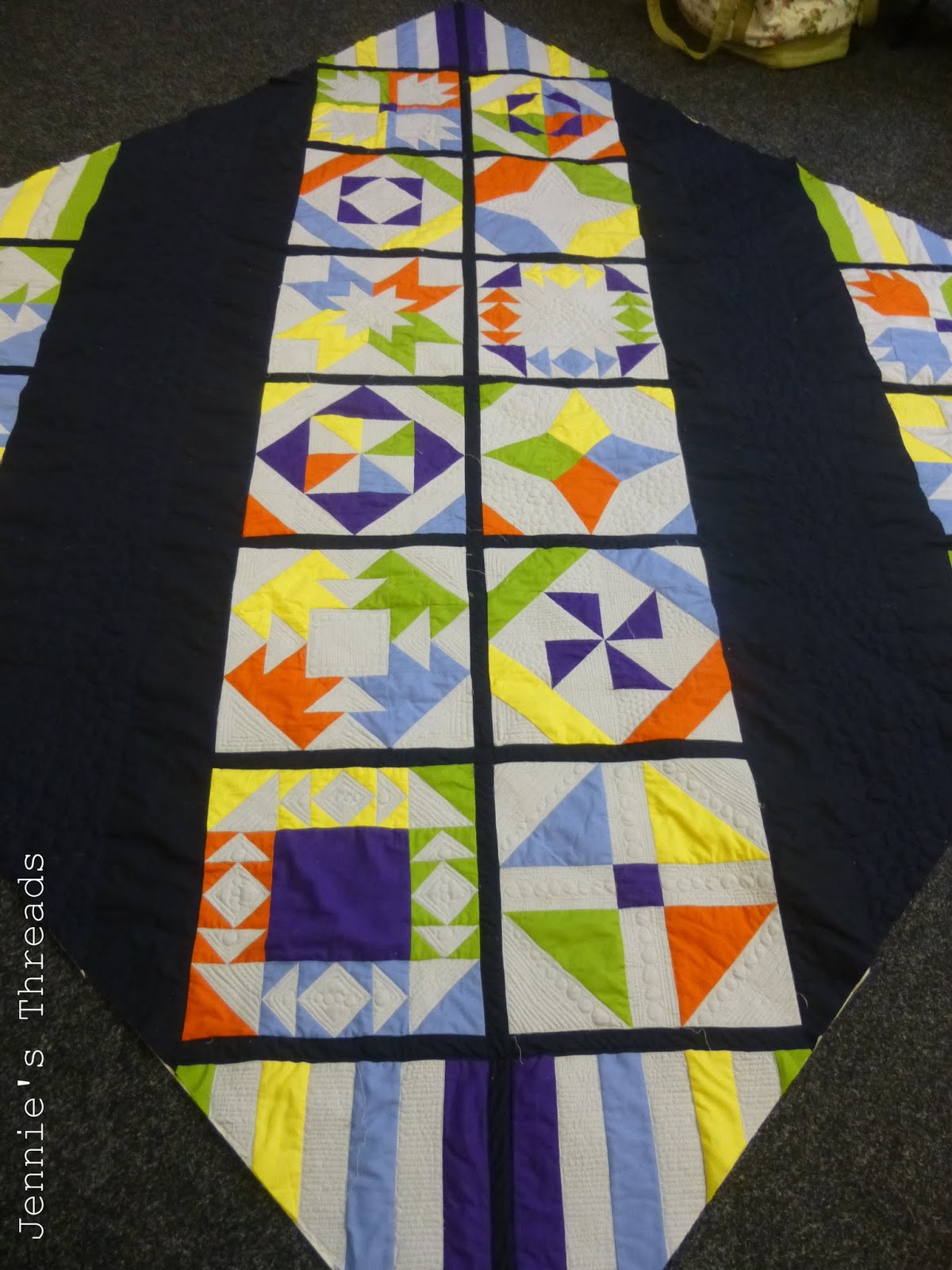 It took me another week to get to a point where I could add the binding. Normally this is where I declare a quilt finished, but this one needed a label. More secret sewing. More close calls - I was embroidering in the living room whilst he was playing X-Box in the dining room - I could see his feet and kept checking on them out of the corner of my eye, ready to quickly pick up another embroidery if he moved. Which inevitably he did. 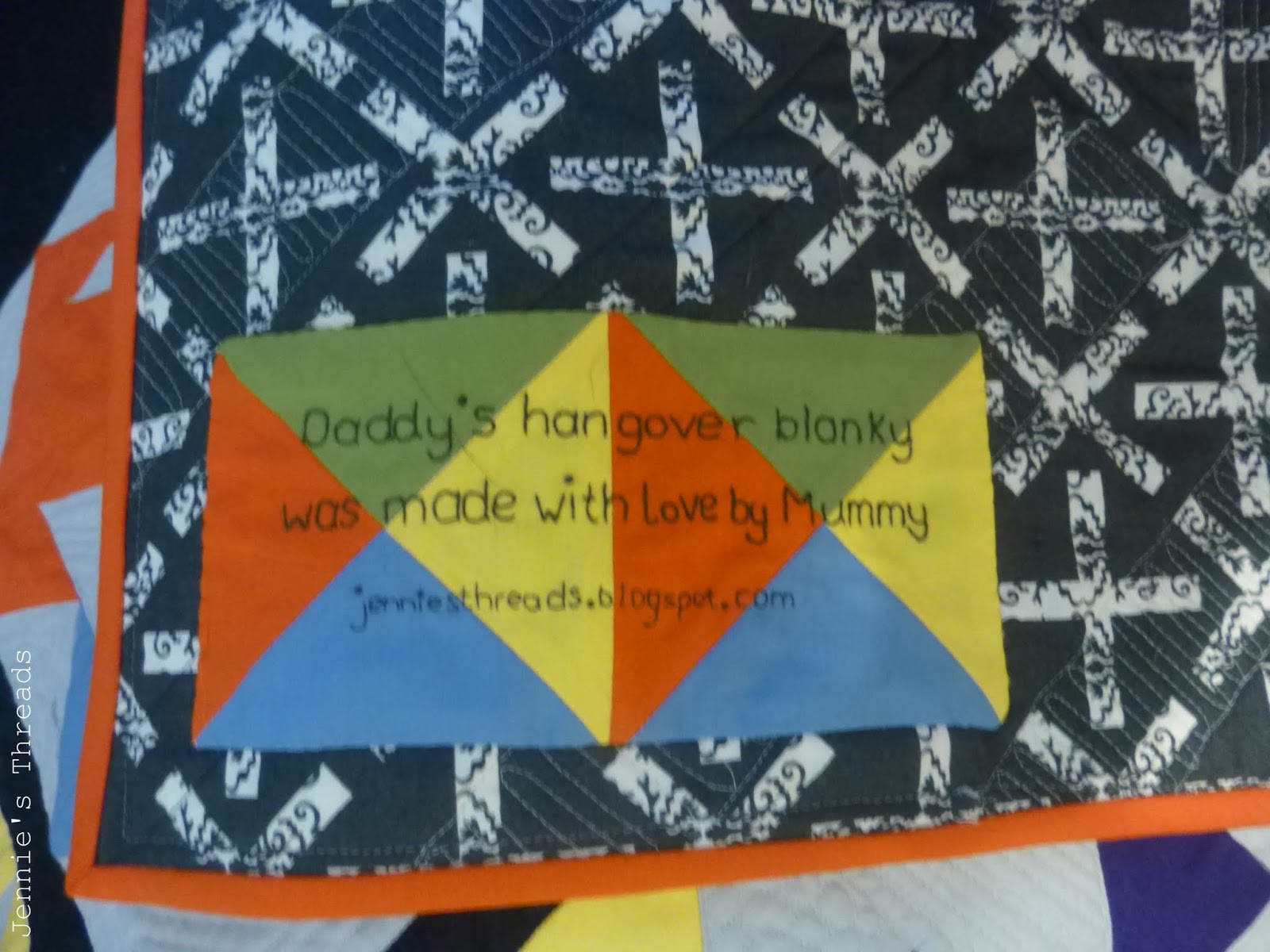 It was his work Christmas party a week before Christmas. I trimmed the ends, folded it into an empty nappy box, wrapped it and heaved a huge sigh of relief.

If you've made it this far in this monster post, then thank you. I can confirm that the quilt was gifted Christmas morning and spent Christmas being examined by family

This quilt is wonderful and I sure love the photos too.

I think the colors are quite masculine! Great job! Such a labor but so worth it! ;-)

Great quilt. Definitely masculine enough and i love the setting

What a gorgeous quilting, I love it! The quilt is wonderful!

Holy cow! What a story. Talk about determination! I think this quilt looks wonderful and I hope that your hubs has plenty of hangovers under it. Waaaaaait. Wha? :) Anywho, I hope it gets good use!! AM